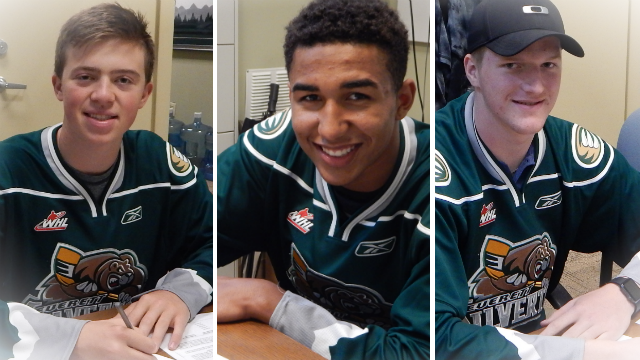 “Depth and potential are tremendous attributes of our organization and we’re even more confident about those qualities after what we’ve added,” said Davidson. “Jake has made great progress with his development and while we admire his feet, hands and skill set, amazingly, he can still take his physical maturity to higher levels. Montana is an incredibly huge and physical specimen who was a force in camp. We like his upside and we’re expecting him to make a major impact in his midget year. Cam’s size, reach, and impressive stick work are building blocks for his success. He’s a credit to the attainments of head coach Eric Silverman with the Dallas Stars Elite Under-16 program and we look forward to working with his continued progression.”

Christiansen, who turns 16 on Dec. 9, was selected by the Silvertips in fifth round (105th overall) in the 2014 WHL Bantam Draft. The 6-foot, 185-pound defenseman suited up for his midget year with the Hollyburn Huskies (PCAHA), racking up 51 points (16g-35a) in 49 games last season while adding four games with the Vancouver Northwest Giants (BCMML).

Onyebuchi, 15, was selected by Everett in the third round (63rd overall) of the 2015 WHL Bantam Draft. The 6-foot-2, 190-pound blueliner was tied for third among blueliners in assists (10) for the Eastman Selects of the Winnipeg Bantam AAA Division-1 league. He earned 15 points (5g-10a) in 32 games, fourth among the club’s defensemen. The 2000-born defenseman is eligible for the NHL Entry Draft in 2018.

Dykstra, 17, last skated with the Stars Under-16 program of the Tier-1 Elite Hockey League, collecting 13 points (3g-10a) in 51 games. The 6-foot-4, 220-pound defenseman also added an assist in four postseason games. His father, Steve, skated as a defenseman for 217 career games in the National Hockey League with Buffalo, Edmonton, Pittsburgh and Hartford while appearing in 15 games for the Oilers in 1987-88, who would eventually win their fourth Stanley Cup in franchise history.

The Silvertips will announce their full preseason roster soon.

The WHL Scholarship encourages graduates to pursue a post-secondary education while also affording them the opportunity to continue playing hockey at an elite level in the Canadian University or College systems. For every season a player spends in the WHL, he receives a full year guaranteed Scholarship to a higher education institution. Each year over 300 WHL graduates attend a university or college on a WHL Scholarship.