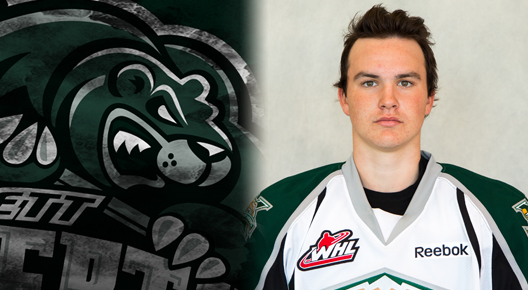 Cochrane, 17, is the Chiefs’ leading scorer this season and ranks third among all BCHL defensemen with 34 points in 42 games.  His 12 goals are second in the league among blueliners, while he has also contributed 22 assists and 42 penalty minutes this year.  Cochrane is also the second-youngest player on Chilliwack’s roster, having turned 17 only three months ago on October 18.

“Carter is an exciting young defenseman with good mobility and offensive capabilities,” said General Manager Garry Davidson.  “He’s a guy who likes to jump in the rush and is good on the powerplay, but isn’t afraid to play a bit of an agitating style as well.  Carter was listed by our scouting staff a couple of years ago, and we’re excited to have him in our organization.  He is a good example of our scouts continuing to look for quality players after their draft year.”

Cochrane was placed on Everett’s protected listed after going unselected in the WHL Bantam Draft and attended training camp with the club in 2012.  A native of Kamloops, BC, he played last season with the Golden Rockets of the Junior-B Kootenay International Junior Hockey League, where he totaled 21 points (9g/12a) and 92 penalty minutes in 34 games.  The 5-11, 190-pound defender was then the Rockets’ second-leading playoff scorer with 14 points (3g/11a) in ten postseason contests.

The Silvertips return to action with back-to-back home games this weekend.  The ‘Tips play host to the division rival Spokane Chiefs Friday at 7:35 pm and the Moose Jaw Warriors out of the Eastern Conference Saturday night at 7:05 at Comcast Arena.