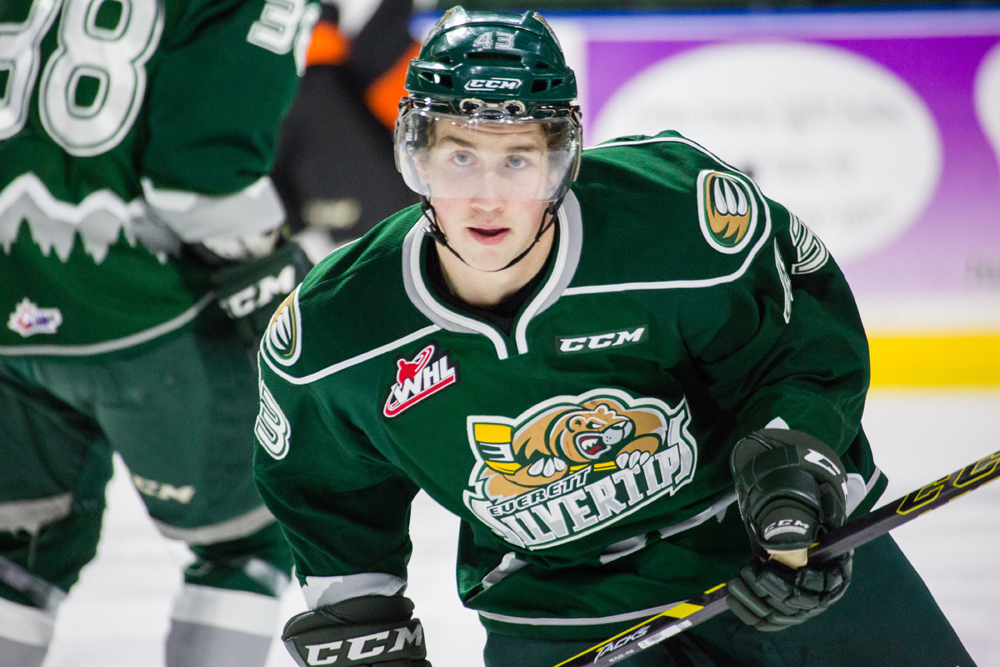 SPOKANE – Jake Mykitiuk scored at 2:07 of the second overtime and Carter Hart made 45 saves in goal as the Everett Silvertips took a 2-1 victory over the Spokane Chiefs in Game 3 of their first-round playoff series Wednesday night at Spokane Veterans Memorial Arena.  By winning the second-longest game in franchise history, the Silvertips take a 2-1 series lead into Friday’s Game 4 in Spokane.

Mykitiuk’s first career playoff goal off a feed from Ivan Nikolishin ended just the third multiple-overtime game in team history.  Brayden Low also scored from a Carson Stadnyk primary assist to tie the game at one early in the third period.  Spokane outshot Everett 31-18 from the third period on, but Hart (2-1) was not beaten after the first period.

Everett had a wealth of prime scoring opportunities and two powerplays in the opening period, but could not find the back of the net to take the lead.  Adam Helewka made it 1-0 Spokane at 14:19 of the first, banking a shot in off Carter Hart’s shoulder from behind the net for the game’s first goal.  Shots were 11-10 for Everett after one.

The scoring chances slowed in the second period although Spokane had two powerplays and Everett had one as the Chiefs continued to lead 1-0 into the third.  The Silvertips scored just 52 seconds into the third when Brayden Low received a centering feed from Carson Stadnyk and tucked it between Garret Hughson’s pads to even the score at one.  Spokane would gain steam as the period progressed and outshoot Everett 20-12 in total, but was unable to solve Hart.

The Chiefs had the better opportunities and one powerplay chance in the first overtime, but the game continued despite an 11-4 Spokane shot advantage.  Nikolishin entered the zone on the right wing early in the second OT and saucered a pass into the slot to Mykitiuk, who snapped it home for the winning goal.

The Silvertips will now look to take a 3-1 lead when the series resumes Friday night at 7:05 pm at Spokane Arena, with pregame radio coverage beginning at 6:30 on Fox Sports 1380 AM.  The ‘Tips and Chiefs will then return to XFINITY Arena for Game 5 Saturday at 7:05 pm.