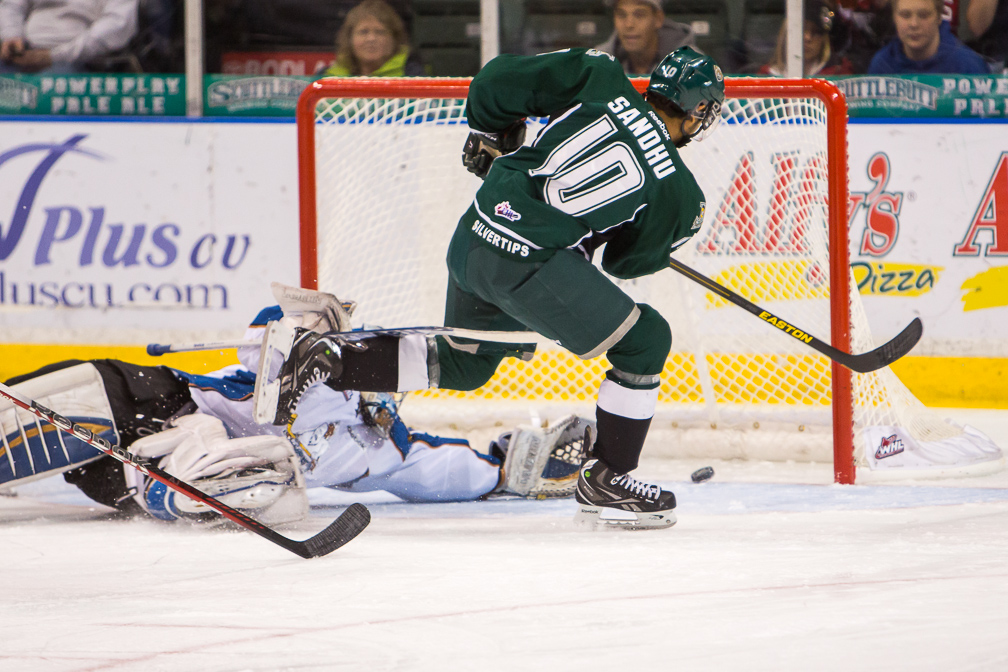 EVERETT – Tyler Sandhu scored two goals to boost the Everett Silvertips to a 4-3 victory over the Kootenay Ice in a wild game before over 5,200 fans Saturday night at Comcast Arena.  The Silvertips’ third straight home win was also their tenth of the season as they prepare to host the Kelowna Rockets on Sunday.

Sandhu’s two scores gave him eight for the season, bringing him even with Josh Winquist and Kohl Bauml for the team lead.  Winquist assisted on both Sandhu goals in his first game back from a one-month absence and Manraj Hayer also posted a pair of assists.  Reid Petryk and Ty Mappin scored the other Everett goals and Daniel Cotton (7-5-0-0) was solid in net with 34 saves.

A busy first period saw three goals scored in under 50 seconds at one point before the Silvertips took a 3-2 lead into the locker room.  The Ice started quickly when Tanner Muth opened the scoring on long shot through traffic just 13 seconds in.  Everett tied the game at 5:30 when Manraj Hayer backhanded the puck into the slot to Tyler Sandhu, who made a nice move around goaltender Mackenzie Skapski to his first of the night.  A powerplay goal off the rush put the Silvertips on top when Hayer found Josh Winquist, whose shot from the left circle was re-directed into the net by Sandhu to make it 2-1.

Kootenay tied the game at two on the next shift when a scramble in front of the Everett net resulted in Jon Martin’s goal only 31 seconds after Sandhu scored.  The ‘Tips regained the lead 15 seconds later however as Ice goaltender Mackenzie Skapski was playing the puck when Reid Petryk poked it away from him and into the net.

Kootenay closed the gap in the third when Jakub Prochazka scored low to Cotton’s glove side during a partial breakaway at 6:44.  The Ice outshot the Silvertips 10-5 in the third, but the ‘Tips denied any late chances to secure the 4-3 victory.  Mackenzie Skapski (7-9-0-0) stopped 24 shots as the Ice outshot Everett 37-28 overall.  The Silvertips went 1 for 4 on the powerplay and killed off all three Kootenay opportunities.

The Silvertips will now finish off their Thanksgiving weekend with another home game Sunday afternoon as they take on the Kelowna Rockets for the first time this season.  Opening faceoff is set for 5:05 pm at Comcast Arena, and families are invited to come early for a free public ice skating session from 3:30 to 4:30 pm at the Comcast Community Ice Rink.