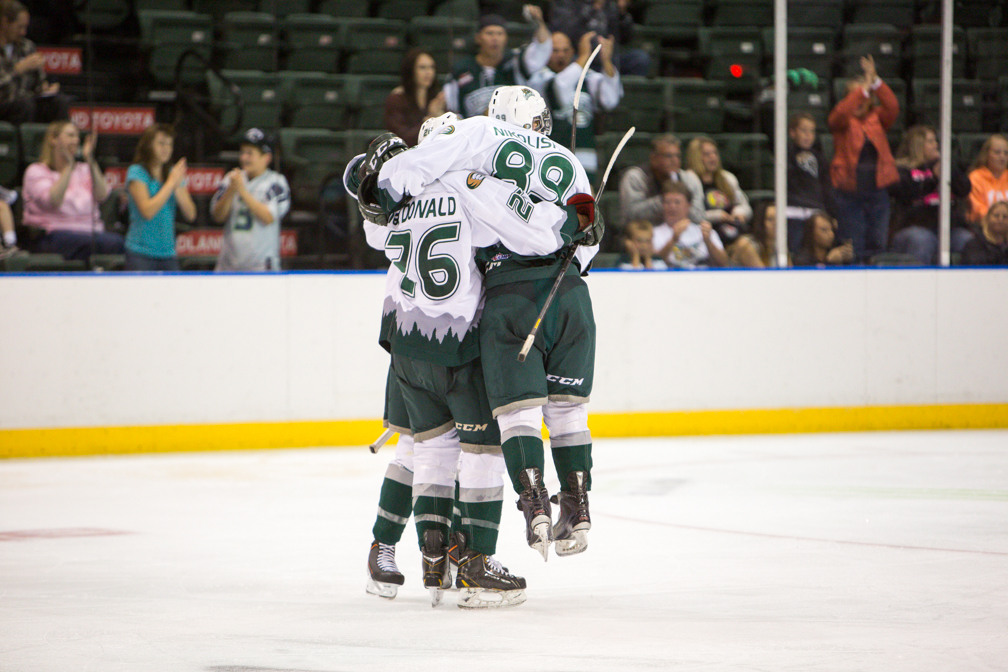 KENNEWICK – The Everett Silvertips continued their high-scoring preseason stretch Saturday afternoon at the Toyota Center, outlasting the Kootenay Ice 8-6 in an explosive show of offense.  The victory keeps Everett unbeaten at 5-0 in the preseason heading into the final weekend of exhibition play, which features a home-and-home set against the Seattle Thunderbirds starting Friday at Comcast Arena.

15 different players recorded at least one point for the Silvertips, who have scored 22 goals in their last three preseason contests.  Manraj Hayer and Patrick Bajkov both scored twice in Saturday’s win, with Hayer adding an assist to finish with three points.  Carson Stadnyk and Brayden Low each contributed three helpers, while Kevin Davis (1g/1a) and Dawson Leedahl (2a) rounded out the multi-point contributors.

Kootenay’s Kyle O’Connor scored the game’s first goal four minutes in, but the ‘Tips answered back with a 5-on-3 powerplay goal from Kevin Davis and another score from Logan Aasman just over three minutes later to take a 2-1 lead.  After the Ice tied the game at two on Matthew Alfaro’s powerplay goal, Manraj Hayer netted a powerplay tally of his own with less than 90 seconds left in the period to put Everett on top 3-2 after one.

The Ice took a 4-3 edge at the midway point of the second period, with Collin Shirley and former Silvertip Jordyn Boyd scoring goals only 13 seconds apart.  Again the ‘Tips responded however, with defenseman Austin Adam finding the twine at 13:32 and 15-year-old Patrick Bajkov following suit two minutes later as Everett leapfrogged back into the lead.  Hayer’s second goal of the contest a short time later gave the Silvertips a 6-4 advantage through 40 minutes of play.

Shirley notched a second powerplay goal at 6:54 of the third to get the Ice back within 6-5, but Bajkov’s second goal restored Everett’s two-goal cushion on the powerplay with just over five minutes to play.  Kootenay’s Austin Vetterl scored to make it a one-goal contest again less than a minute later as the back-and-forth action continued.  Ivan Nikolishin batted the puck out of mid-air and into the net at 16:17 however, finally completing the scoring to clinch an 8-6 victory for the Silvertips.

Making his first start of the preseason, 15-year-old goaltender Nik Amundrud finished with 19 saves for the win.  Wyatt Hoflin made 26 saves in net for Kootenay as Everett finished with a 34-25 shot edge.  The Silvertips converted 3 of 6 powerplay opportunities, while the Ice went 2 for 2.

The Silvertips have now completed five of seven preseason games with the start of the regular season exactly two weeks away.  Everett hosts the front end of a home-and-home set with Seattle Friday night at 7:35 at Comcast Arena before completing the exhibition schedule Saturday against the Thunderbirds in Kent.  The ‘Tips open the 2013-14 WHL regular season on home ice against the Prince George Cougars on Saturday, September 21.

Preseason tickets as well as season tickets and mini-game packages for the 2013-14 WHL season are available now at the team office.  Visit our website or call 425-252-5100 for more information.  To keep up with all the latest team news, “like” the Everett Silvertips Hockey Club on Facebook or follow @WHLSilvertips on Twitter.