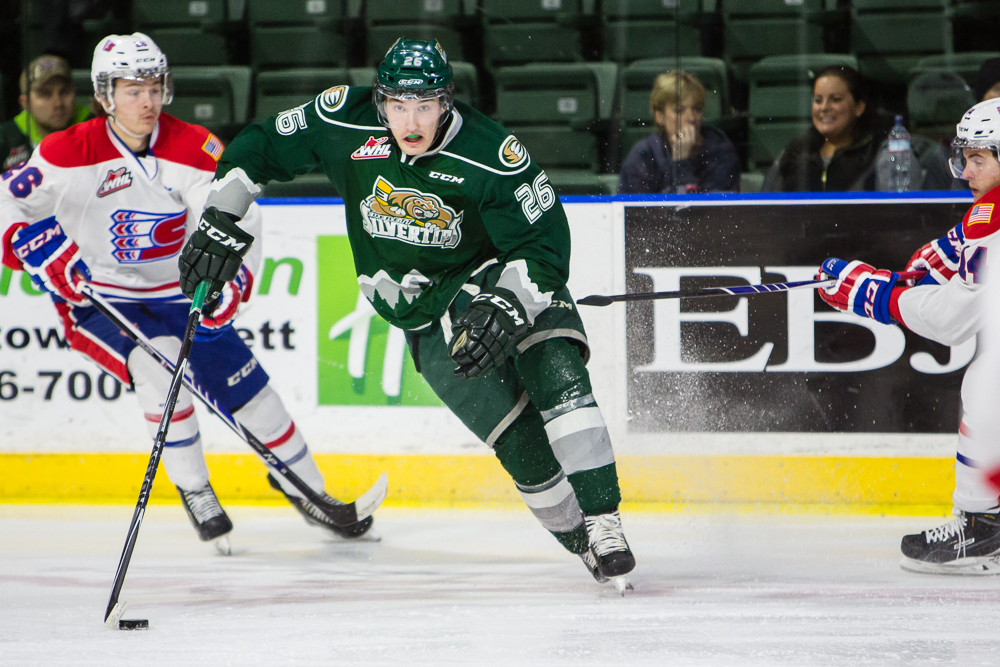 SPOKANE – The Everett Silvertips scored three straight goals in the third period to break a 2-2 tie on their way to a 5-4 victory over the Spokane Chiefs in their regular season finale Sunday evening at Spokane Veterans Memorial Arena.  The 2015 U.S. Division Champions finish the year at 43-20-3-6 for 95 points as they prepare to open the WHL Playoffs against the Chiefs, with Games 1 and 2 coming up Friday and Saturday at XFINITY Arena.

Gunnar Wegleitner netted his first Western Hockey League goal to open the scoring, which was also his first point just two minutes into the game.  Patrick Bajkov, Noah Juulsen, Jake Mykitiuk and Brayden Low (in his final regular season game) provided the other scoring for the Silvertips.  Kevin Davis, Cole MacDonald and Logan Aasman each contributed two assists as well as the ‘Tips set a new franchise record with 242 goals for the season.

The Silvertips took the early lead just 2:02 into the contest when Kevin Davis’ point shot was re-directed into the top corner by 16-year-old  rookie Gunnar Wegleitner for his first WHL point.  Everett made it 2-0 minutes later on another deflection as Patrick Bajkov tipped in a shot from Cole MacDonald for his 23rd goal of the season.  Spokane cut the lead in half on the powerplay later in the first on a goal from Kailer Yamamoto to make it 2-1 after one.

The Chiefs evened the score midway through the second period on Adam Helewka’s 43rd goal of the year.  Spokane outshot Everett 13-4 in the middle frame, but the scored remained even at two heading into the third.

Noah Juulsen put the ‘Tips back ahead at 3:35 of the third, skating down the right boards and sending sharp-angle shot in off the skate of goaltender Tyson Verhelst.  Jake Mykitiuk scored a powerplay goal off the rush on a Logan Aasman feed midway through the period and Brayden Low slammed home the rebound of a Jantzen Leslie shot four minutes later to extend the lead to 5-2.  Spokane got late goals from Riley Whittingham and Helewka to cut the final score down to 5-4 as the Silvertips won the season series with the Chiefs for the first time in five years.

The Silvertips and Chiefs will now face-off in a best-of-seven first-round WHL Playoff series starting with Game 1 at 7:35 pm Friday at XFINITY arena.  Game 2 follows Saturday night at 7:05 before the series shifts to Spokane for Games 3 and 4.  Playoff packages and single-game tickets for both of Everett’s first two home games are on sale now.