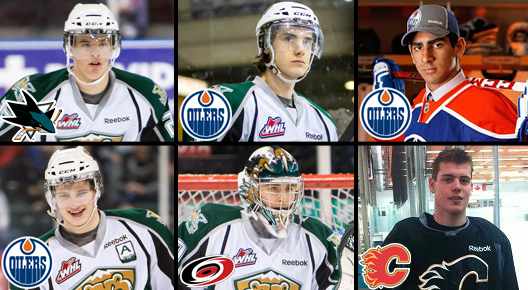 EVERETT – The Everett Silvertips today announced six players from the club who will attend training camp with National Hockey League teams during the 2013-14 WHL preseason.  All six players will first report to Everett this week for Silvertips training camp before departing for their respective NHL camps after the Holiday Inn Preseason Classic tournament over Labor Day weekend.

Defenseman Mirco Mueller is set to join the San Jose Sharks, who selected him with the 18th overall pick in this year’s NHL Draft.  Fellow blueliner Ben Betker, a sixth-round draft choice (158th overall) this June, will report to the Edmonton Oilers along with forward Jujhar Khaira (a 2012 Oilers pick who recently signed an NHL contract) and free-agent forward Reid Petryk.  Also accepting free-agent opportunities next month are goaltender Austin Lotz with the Carolina Hurricanes and listed forward prospect Linden Penner with the Calgary Flames.

Five of the six players will depart Everett only to find themselves right back together at the Vancouver Canucks’ Young Stars Classic tournament in Penticton, BC.  Prospects from the Sharks, Oilers, Flames, Canucks and Winnipeg Jets converge on the Penticton tournament for a chance to impress NHL scouts from September 5-9.  Mueller will then travel to San Jose to attend the Sharks’ main training camp, while Khaira ventures north to Edmonton’s main camp after the tournament.

Though he won’t be joining his Everett teammates at the tournament in Penticton, Austin Lotz will take part in the NHL’s other major rookie tournament taking place at the same time.  Lotz will join fellow prospects from the Hurricanes and seven other NHL clubs in Traverse City, Michigan for the 2013 NHL Prospects Tournament, hosted annually by the Detroit Red Wings.

The Silvertips are set to start their own training camp this week at Comcast Arena, with players reporting on Wednesday and on-ice sessions starting Thursday.  All training camp practices and scrimmages are open to the public, so please CLICK HERE for the full 2013 camp schedule.

Season tickets and mini-game packages for the 2013-14 WHL season are available now at the team office.  Visit our website or call 425-252-5100 for more information.  To keep up with all the latest team news, “like” the Everett Silvertips Hockey Club on Facebook or follow @WHLSilvertips on Twitter.