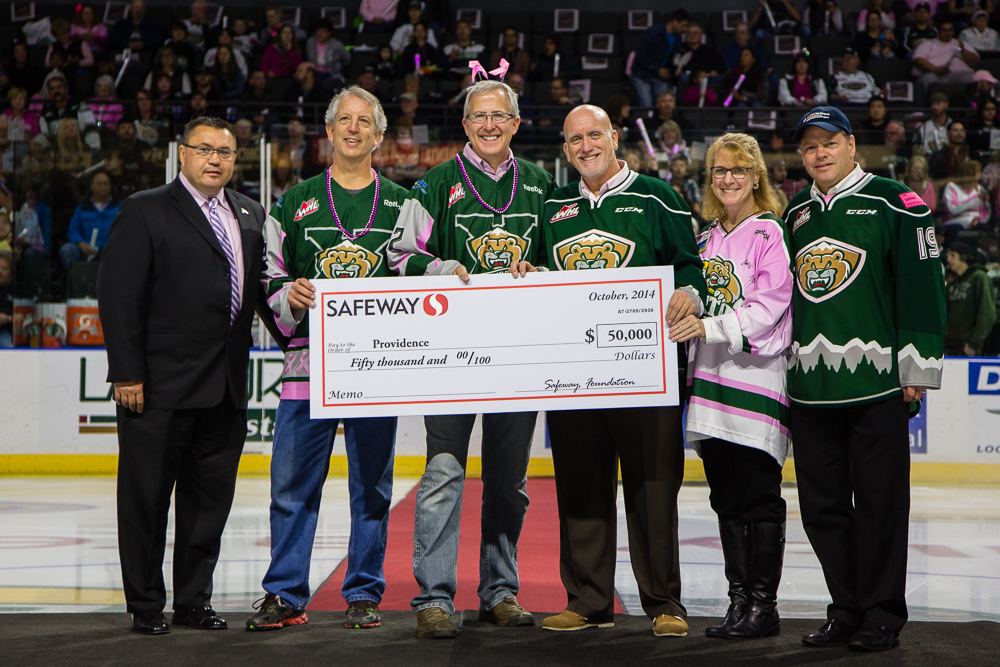 EVERETT – The Everett Silvertips, in conjunction with our partners at the Safeway Foundation, the Providence Comprehensive Breast Center and the Providence Regional Cancer Partnership, are proud to announce that Pink the Rink 2014 has raised over $86,000 in new donations to fight breast cancer in our community.  Through the generosity of so many fans and supporters, Pink the Rink has now raised over $400,000 for the cause over the past six seasons.

The funds donated to the Providence General Foundation through Pink the Rink go toward providing free and low-cost breast cancer screenings for local women without insurance or the means to pay.  By aiding with early detection, the money raised will help Providence fight breast cancer and ultimately save lives right here in Snohomish County and the surrounding areas.

For the fourth consecutive year, the Safeway Foundation donated $50,000 to the Providence Comprehensive Breast Center in a center-ice presentation before the game.  Pre-game festivities again included special recognition for six breast cancer survivors, who were presented bouquets of pink roses by players in the Silvertips’ starting lineup.  Thousands of light-up pink glow sticks handed out to fans courtesy of the Safeway Foundation and Providence Breast Center also contributed to the atmosphere on this special night.

The fans of Silvertip Country provided the rest of the donation total through ticket sales, jersey auctions, pink pucks, t-shirts and many other methods of donating in and out of the arena.  A crowd of over 7,600 fans enjoyed Saturday’s festivities as the Silvertips defeated the Seattle Thunderbirds 2-1 in overtime.