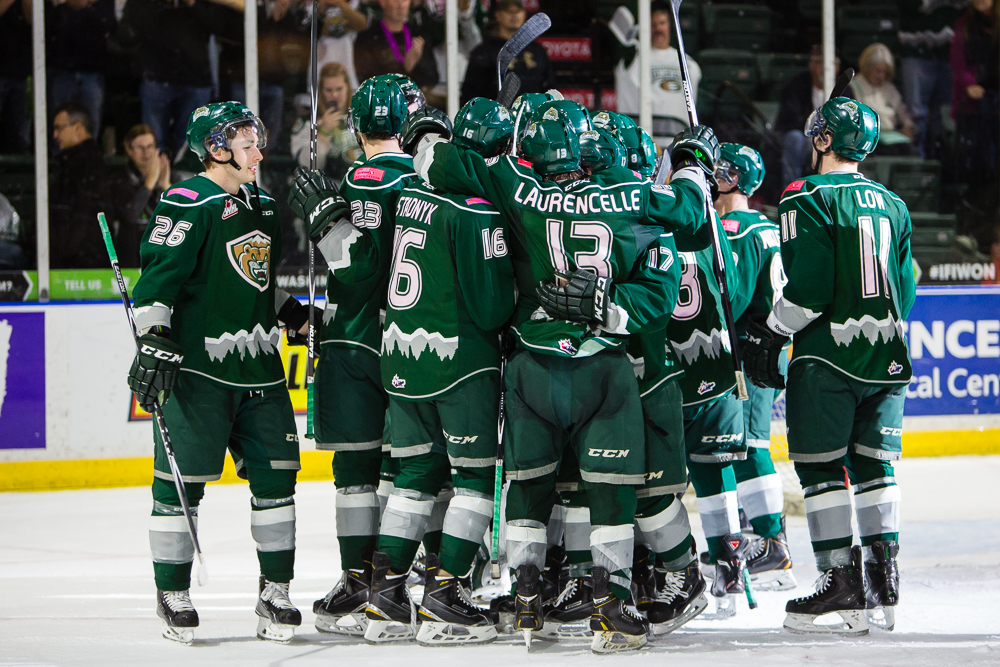 EVERETT – The Everett Silvertips fired 38 shots on net and Nikita Scherbak scored twice to lift the ‘Tips to a 3-1 victory over the Tri-City Americans Friday night at XFINITY Arena.  The win puts Everett in front of Tri-City for first place in the U.S. Division with a 7-1-2-1 record and 17 points heading into Saturday’s “Pink the Rink” game against the rival Seattle Thunderbirds.

Despite a commanding 38-13 shot advantage for the Silvertips, the result of the game remained in doubt until Scherbak’s empty-net goal put Everett up by two with 1:32 remaining.  Carson Stadnyk scored his team-leading seventh goal of the season to give the ‘Tips a 1-0 lead before Scherbak put the home team back ahead to stay in the third period.  Defenseman Kevin Davis picked up two assists and was named first star for his efforts.

The Silvertips controlled the opening period and outshot the Americans 21-3 through the first 20 minutes.  Tri-City took three penalties in the first, but goaltender Eric Comrie made save after save to keep the game scoreless.  The ‘Tips finally broke through on their 25th shot of the game midway through the second frame as Carson Stadnyk received a pass from Davis for an odd-man rush, carrying the puck from the side boards and firing a low shot to the far post for a 1-0 lead.  Everett held the lead and a 30-8 advantage on the shot clock heading into the final frame.

Everett took a penalty early in the third and the Americans quickly capitalized on the powerplay as Jackson Playfair tipped in a shot by Justin Hamonic to tie the game at one.  The ‘Tips went back on top on a powerplay of their own midway through the period, with Cole MacDonald releasing a rocket from the blue line and Nikita Scherbak sending the rebound to the back of the net from the right boards for a 2-1 Everett lead.  Again the Silvertips surrendered just five shots in the period and Scherbak added an empty net goal following a nice clearing play by MacDonald to ice the 3-1 victory.

Next up for the Silvertips is their third home game this week Saturday night at 7:05 pm against the rival Seattle Thunderbirds for Pink the Rink 2014.  Our sixth-annual breast cancer fundraiser game provides ample opportunity for fans to donate to the Pink the Rink fund and help us fight breast cancer right here in Snohomish County and the surrounding areas.