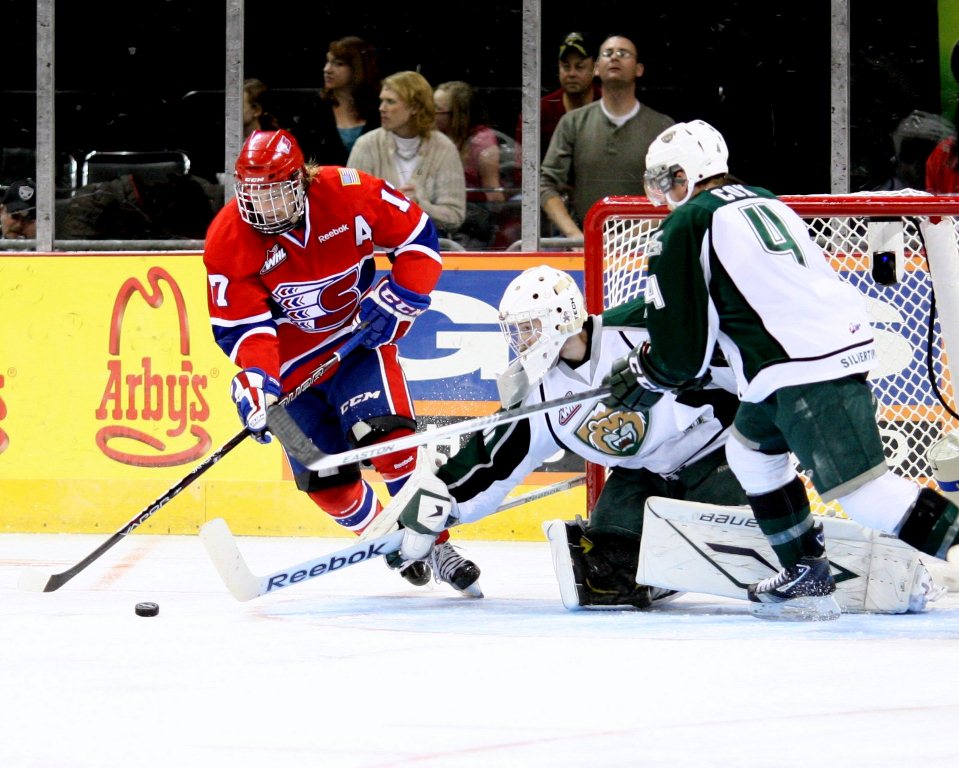 EVERETT – Reid Gow’s goal at 4:41 of the third period broke a 1-1 tie and propelled the Spokane Chiefs to a 3-1 victory over the Everett Silvertips Wednesday night at Spokane Veterans Memorial Arena.  The loss ends Everett’s win streak at two games and extends a stretch of 13 straight losses in Spokane heading into a pair of home games this weekend.

Trent Lofthouse scored the Silvertips’ lone goal, tying the game at one in the third period off assists from Mirco Mueller and Landon Oslanski.  Daniel Cotton (6-5-0-0) stopped 35 shots in net as the ‘Tips were outshot 38-21 in total.

The teams played an entertaining first period that ended scoreless despite a number of scoring chances for both teams.  Spokane put 12 shots to the net and Everett had nine, but both goaltenders made big saves to keep zeros on the board.  The Chiefs broke through with a powerplay goal 57 seconds into the second period after Kohl Bauml blocked a Brenden Kichton point shot only to see Todd Fiddler send a quick blast through traffic and past Daniel Cotton to open the scoring.  Spokane maintained that 1-0 advantage throughout the remainder of the period into the third.

The Silvertips evened things up less than two minutes into the final stanza when Trent Lofthouse backhanded the rebound of a Mirco Mueller shot through Garret Hughson’s five-hole on the powerplay.  The tie last only three minutes however, as Reid Gow rushed the puck into the Everett zone during a four-on-four situation and wired a wrist shot low inside the post to put Spokane back on top.  The ‘Tips couldn’t muster enough offense to answer again before the Chiefs sewed up the win with an empty-net goal in the final minute.

Garret Hughson (3-1-0-0) made 20 saves to get the win in goal for Spokane.  The Silvertips scored on one of their two powerplay chances, while the Chiefs went 1 for 3.

The Silvertips are back at Comcast Arena this Thanksgiving weekend for a pair of home games Saturday and Sunday in downtown Everett.  The ‘Tips play host the Kootenay Ice out of the Eastern Conference Saturday at 7:05 pm and then take on the Kelowna Rockets for the first time this season Sunday afternoon at 5:05 pm.