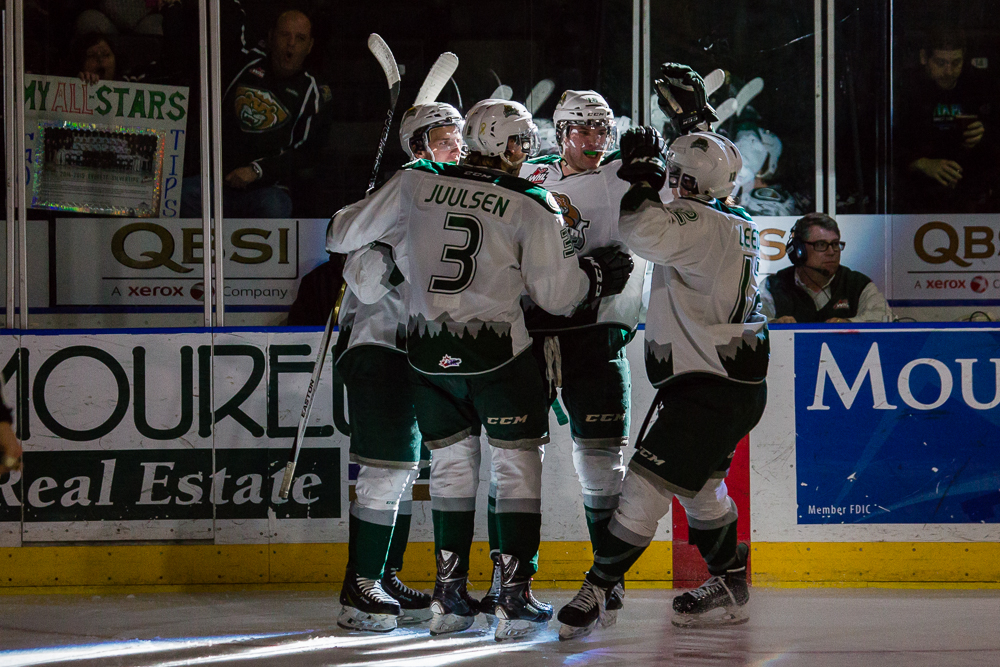 EVERETT – Carson Stadnyk scored three goals in the first five minutes of the third as the Everett Silvertips netted five unanswered goals to defeat the Spokane Chiefs 5-1 in their playoff opener Friday night at XFINITY Arena.  The ‘Tips take a 1-0 lead in the best-of-seven playoff series with Game 2 Saturday night in Everett.

Scoring three goals in three minutes and 46 seconds, Carson Stadnyk set a franchise record for the fastest hat trick in a playoff game.  He also added an assist for a four-point night.  Ivan Nikolishin scored a pair of powerplay goals for the Silvertips to put the game out of reach, while Dawson Leedahl had two assists and Patrick Bajkov picked one. Goaltender Carter Hart (1-0) stopped 22 of 23 shots faced in net.

The first few minutes of the game saw plenty of fast-paced playoff hockey to start the series.  The Silvertips jumped out to a 6-2 lead in shots, but the Chiefs garnered the first powerplay of the game.  Everett and Spokane exchanged penalties throughout the first, neither team finding the back of the net.  The ‘Tips held a slight 10-9 edge on the shot clock through the first 20 minutes of play.

Tension between Everett and Spokane continued to increase through the second period.  The Silvertips were on their second powerplay of the period when goaltender Carter Hart made a crucial pad save during a shorthanded breakaway for Spokane’s Calder Brooks to keep the game scoreless.  The Chiefs found the back of the net first as Liam Stewart deflected a shot in front, sending it between Hart’s legs.  Everett killed off a late penalty in the second to keep it a one-goal game heading into the third.

Carson Stadnyk got the Silvertips on the board just 17 seconds into the third, banking a shot in off the back of Spokane netminder  Garret Hughson to tie the game at one.  It was Stadnyk who scored again to give Everett a 2-1 lead just over a minute later as he fired a loose puck in through traffic from the top of the circle.  Stadnyk completed the hat trick by driving the net from the right wing and sniping a sharp-angle shot over Hughson’s shoulder from a tight angle at 4:03 and suddenly the Silvertips had a 3-1 lead.

As the third period progressed, so did the tension between the two teams as Everett headed back to the powerplay.  Ivan Nikolishin scored on the man-advantage on a one-timer off a Stadnyk feed to put the Silvertips up 4-1 just past the midway point of the third.  Things got nastier on the ice following three fights and a plethora of penalties handed out in the waning minutes.  Everett found themselves back on the powerplay late in the game when Nikolishin scored his second of the night to give the ‘Tips a 5-1 advantage.  The game finally came to an end with Everett taking Game 1 and finishing with a 32-23 advantage on the shot clock.

Spokane goaltender Garret Hughson (0-1-0-0) stopped 27 of 32 shots in net.  The Silvertips powerplay went 2 for 8 on the night while their penalty kill was successful on all four Spokane powerplays.  The teams ended the night with a combined 157 penalty minutes, 87 for the Chiefs and 69 for the Silvertips.

The Silvertips and Chiefs face-off in Game 2 of the best-of-seven first-round series Saturday night at 7:05 at XFINITY Arena.  The first 3,000 fans through the doors will receive green glow sticks courtesy of the Dwayne Lane’s Family of Auto Centers.  Playoff packages and single-game tickets for Game 2 are on sale now.