Syd the Kid with Kevin Constantine 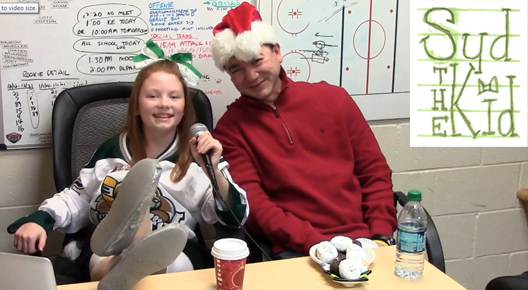 “Syd the Kid” is our new Silvertips junior reporter for the 2013-14 season.  Sydney is a longtime Silvertips superfan who isn’t much older than the team itself.  Throughout the season she’ll be putting Silvertips players and team staffers on the spot with interviews and other creative segments that you’ll find on the Silvertips’ YouTube channel and see on the Comcast Arena video board during games.

In her holiday edition, Syd the Kid uses last month’s five-game winning streak to make Kevin Constantine hold up his end of their office bargain from earlier in the season.  Then she catches up with returning Assistant Coach Mark LeRose about his travels in recent years, how he became a skating coach and some differences between figure skaters and hockey players…

And in case you missed it, here was Syd’s interview from last week with second-year defenseman Ben Betker (also known as “Big Ben”… especially for the purposes of this video!):

Keep an eye out all season long for new “Syd the Kid” videos!

Season tickets and mini-game packages for the 2013-14 WHL season are available now at the team office.  Visit our website or call 425-252-5100 for more information.  To keep up with all the latest team news, “like” the Everett Silvertips Hockey Club on Facebook or follow @WHLSilvertips on Twitter.