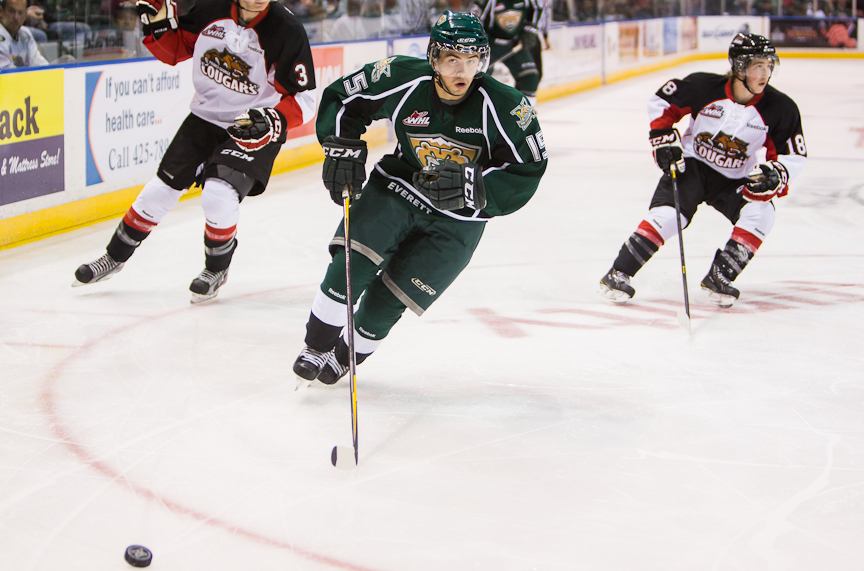 PRINCE GEORGE, BC – Two goals just over one minute apart in the third period helped the Everett Silvertips come up with a 3-2 victory in the first of two straight games against the Prince George Cougars Friday night at the CN Centre.  The win gives Everett points in five straight games and wins in four of those as they prepare to face the Cougars again on Saturday.

Kohl Bauml scored two goals in the contest, including the game-winner in the third period.  Manraj Hayer notched the other Everett tally and Austin Lotz (12-14-1-1) turned in another solid goaltender effort with 40 saves as the Silvertips were outshot 42-22 by Prince George.  Penalty killing was another strong point for the ‘Tips, who killed all five Cougar advantages including a late 5-on-3 to finish out the win.

The Silvertips jumped out to the lead less than six minutes into the game during a 4-on-4 situation.  Ty Mappin rushed the puck down the left side and fed a pass across the slot to Kohl Bauml, who one-timed the puck past Brett Zarowny for his 16th goal of the year.  Prince George generated a few quality chances later in the period, but Austin Lotz was solid with 14 saves as Everett took a 1-0 advantage into the locker room.

The score remained through over half the second frame before Troy Bourke banged in the rebound of a Daniel Gibb shot to get the Cougars on the board at 12:34.  Prince George pulled ahead only 24 seconds later as Lotz kicked out a shot from the right boards only to see Rinalds Rosinskis blast the rebound into the top corner.  The Cougars outshot the Silvertips 16-8 in the second and led 2-1 after two periods.

Still down by one nearly midway through the third, Everett tied the game when Josh Winquist drew a defender to the boards and dished a pass in front to a wide-open Manraj Hayer, who scored from atop the goal crease to even things at two.  Just 1:13 after that, Bauml skated down the left boards and ripped a slapshot over Zarowny’s right shoulder and into the top corner to put the Silvertips back ahead at 3-2.  Two Everett penalties in the final minutes gave Prince George a late two-man advantage, but the ‘Tips hung on to ice the one-goal victory.

Brett Zarowny (9-12-0-0) stopped 19 shots while taking the loss in goal for the Cougars.  Everett finished the night 0 for 2 on the powerplay.

The Silvertips will now conclude their four-game B.C. Division road trip Saturday night in the second game of this weekend’s back-to-back set against the Cougars.  Opening faceoff is set for 7:00 pm, with pregame radio coverage starting at 6:30 on Fox Sports 1380 AM.  The ‘Tips will then return to Comcast Arena to take on the Portland Winterhawks Tuesday at 7:05 pm.