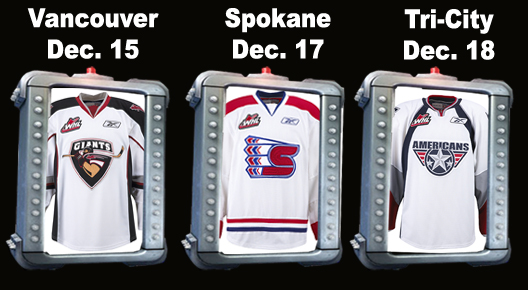 The Silvertips finish up the first half of the WHL schedule by hosting three Western Conference rivals, beginning on Wednesday, December 15th against the Vancouver Giants. Always a hard-working team under Head Coach Don Hay, the Giants, led by forwards Craig Cunningham and Brendan Gallagher, remain a difficult team to play against. Come check out Everett’s north-of-the-border rivals in a great atmosphere at Comcast Arena. ‘Tips-Giants games always provide inspired, energetic hockey with a lot at stake. It’s also Shane Harper Bobblehead Night presented by Van Dam’s Abbey Carpet & Flooring, so make sure to pick up your tickets today!

The ‘Tips host the Spokane Chiefs for the first time in 2010-11 on Friday, December 17th. Led by Head Coach Don Nachbaur, the Chiefs are a gritty, hardworking team that has done a good job at spreading their scoring around this year, with 14 players already reaching double digits in points. Forward Tyler Johnson won a gold medal with USA Hockey at last year’s World Junior Championships and is averaging well over a point per game for the Chiefs.

To wrap up the first-half schedule, the Silvertips host the Tri-City Americans on Saturday, December 18th. A fast, exciting offensive club under Head Coach Jim Hiller, the Americans will be looking for revenge after Everett posted 5-2 and 4-2 wins in the club’s last two outings. There will be a ton of speed on the ice when these two teams match up against each other in what should be another hotly contested rivalry game at Comcast Arena.