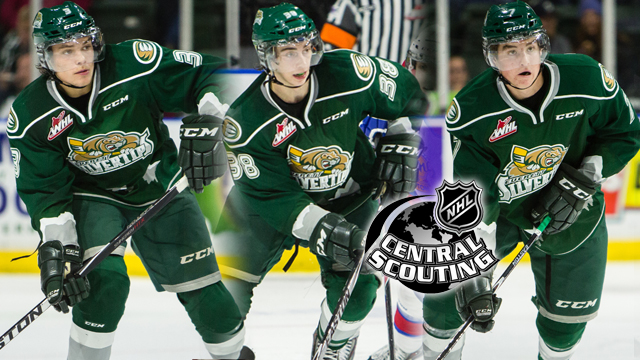 EVERETT – The NHL Central Scouting Service has released its November preliminary watch list for the 2015 NHL Draft, with three Silvertips players appearing on the list.  Defensemen Noah Juulsen and Kevin Davis are joined by fellow defender Tristen Pfeifer, who appears on the Central Scouting list for the first time.

Juulsen appeared in the NHL Draft Futures List over the summer, while Davis was added in the Central Scouting preliminary rankings from September.  Pfeifer has also played his way onto the newest list in his rookie WHL season, while defenseman Carter Cochrane is not listed despite showing up in the prior rankings.  A total of 59 Western Hockey League players appear in the rankings.

Eight WHL players were assigned an ‘A’ rating, including Mathew Barzal of the Seattle Thunderbirds, Paul Bittner of the Portland Winterhawks, Brandon Carlo of the Tri-City Americans, Jansen Harkins of the Prince George Cougars, Ivan Provorov of the Brandon Wheat Kings,  Nick Merkley of the Kelowna Rockets, and Swift Current Broncos’ forwards Jake DeBrusk and Glenn Gawdin.  In addition, 11 WHL players were assigned ‘B’ ratings.

CLICK HERE for the full list of WHL players on the NHL Central Scouting 2015 November Players to Watch or CLICK HERE to view the full rankings.