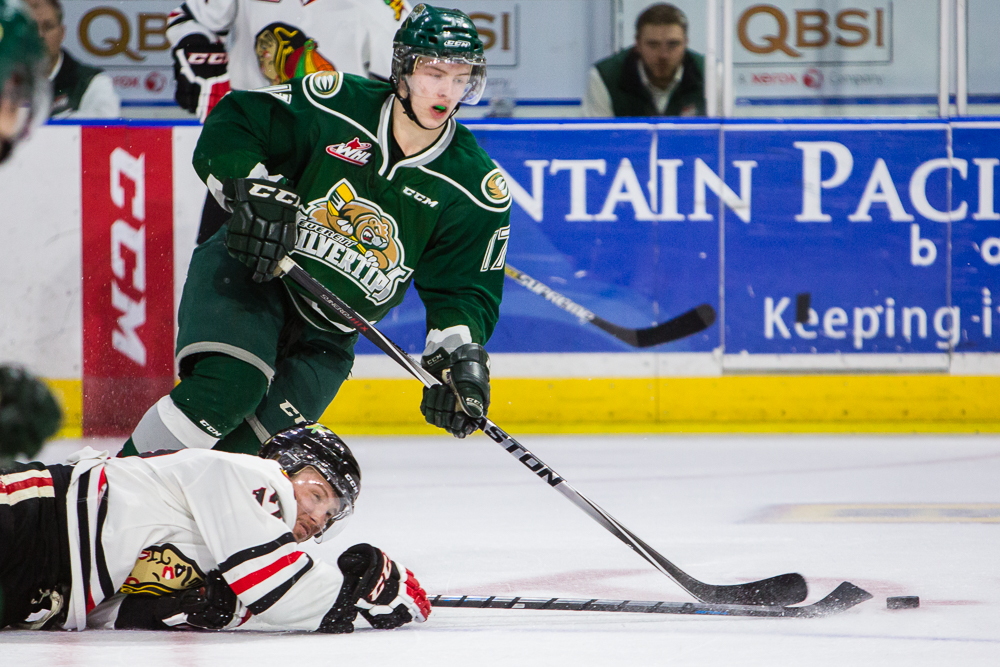 PORTLAND, OR – Defenseman Blake Heinrich scored at 5:40 of overtime to give the Portland Winterhawks a 2-1 victory over the Everett Silvertips in Game 4 of their second-round playoff series Friday night at Veterans Memorial Coliseum.  The Silvertips now face a 3-1 series deficit as they return to Everett to host the Winterhawks in Game 5 Sunday afternoon at XFINITY Arena.

Ben Betker scored the lone Silvertips goal despite a 25-15 shot advantage for Everett through two periods.  Goaltender Carter Hart (5-5) stopped all 12 shots he faced in the third period to preserve the tie and finished the night with 29 saves as Portland outshot the ‘Tips 31-30 in total following the late surge.  It was Everett’s fifth overtime game in ten playoff outings.

The Silvertips started strong in the opening period, outshooting Portland 13-7 and nearly taking the lead on multiple occasions.  Nikita Scherbak rang the post with a quick shot from the high slot and Matt Fonteyne was stopped on a shorthanded breakaway on two of Everett’s best chances of the period.  Both teams missed on their first powerplay of the night, with the Silvertips also holding off Portland on a powerplay chance that carried over into the second.

The Winterhawks grabbed the game’s first goal at 1:15 of the second period, forechecking their way to a turnover in the Everett zone before Chase De Leo ripped a shot over Carter Hart’s glove for a 1-0 Portland lead.  The Silvertips responded at the 12:54 mark after a hard-working shift in the offensive zone held the puck in just before Ben Betker’s wrister deflected in off ‘Hawks defenseman Josh Hanson to even the game at two.  The teams traded unsuccessful powerplays to finish the period as the game remained 1-1.

Portland generated plenty of offense in the third, but Hart and the Silvertips held their ground to maintain the tie.  Shots in the third were 12-5 for the Winterhawks as regulation time expired and the game headed to overtime.  The ‘Hawks generated the first four shots of the extra session and won it when Nic Petan’s cross-ice pass deflected right to a streaking Heinrich, who reached across his body to backhand a quick shot under the crossbar for the winning score.

Winterhawks goaltender Adin Hill (7-3) was the game’s first star with a 29-save performance in the win.  Neither team notched a special teams goal in the game, with Everett finishing 0 for 2 and Portland going 0 for 3.

The ‘Tips now face a must-win game to prolong the series Sunday afternoon at 4:05 when they host the Winterhawks in Game 5 at XFINITY Arena.  To purchase single-game tickets visit www.xfinityarenaeverett.com, call 866-332-8499 or stop by the XFINITY Arena box office.