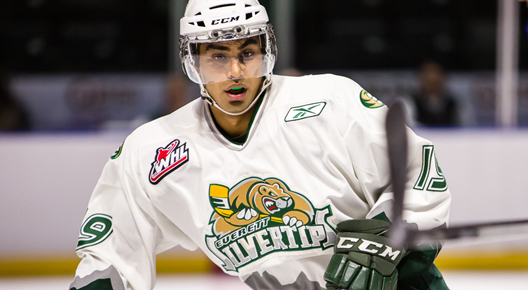 EVERETT – Oliver Bjorkstrand’s third period goal broke a 2-2 tie and a late powerplay goal gave the Portland Winterhawks a 4-2 victory over the Everett Silvertips in the finale of the 11th annual Holiday Inn Preseason Classic Sunday night at Comcast Arena.  The Silvertips finished the tournament with a 1-2 and will head to Tri-City for two more preseason games hosted by the Americans next weekend.

Rookie Lucas Skrumeda and newly-acquired forward Graham Millar each recorded a goal on the night.  Forwards Zane Jones and Ivan Nikolishin picked up the helpers.  Goaltender Austin Lotz stopped eight of ten shots faced in 30 minutes in net while Mario Petit turned away 11 of 13 in relief.

Portland tallied an early goal in the first after Oliver Bjorkstrand found Nic Petan streaking into the ‘Tips zone and Petan’s shot beat the glove of goaltender Austin Lotz to open the scoring.  The ‘Tips evened it when Ivan Nikolishin dropped the puck to Lucas Skrumeda at the blueline, where his low shot found its way through traffice to the back of the net.  After going on the powerplay the Winterhawks regained the lead, this time with Blake Heinrich finishing a feed from Bjorkstrand that gave Portland a 2-1 lead.  Despite the score, the Silvertips held a 13-7 advantage on the shot clock after 20 minutes.

Everett’s penalty killing unit was put to the test to start the second after being dealt a five-minute major penalty, which they successfully killed off.  Minutes after going scoreless on a 5-on-3 powerplay of their own, the ‘Tips capitalized when Graham Millar picked up a rebound in front and lifted the puck on his backhand to tie the game at two.  The Silvertips maintained a 24-13 shot lead heading into the final period of play.

The ‘Hawks re-took the lead on a goal from Bjorkstrand, who picked up his third point of the night on a one-timer from Petan just after a powerplay had expired for the visitors.  Six minor penalties were divvied out in the third and Portland capitalized again as Chase De Leo scored to give the Winterhawks a 4-2 lead late in the frame.

Final shots were 34-22 in favor of Everett through 60 minutes.  Michael Bullion stopped 32 shots in 60 minutes in net for the Winterhawks.  Everett went 0 for 6 on the powerplay and Portland was 2 for 6.

CLICK HERE for a postgame interview with Remi Laurencelle

The Silvertips continue their exhibition schedule with a pair of games next weekend in the 2014 Red Lion Hotels Pre-Season Tournament hosted by the Tri-City Americans.  Everett faces the Seattle Thunderbirds Friday morning at 11:00 am and the Kootenay Ice Saturday morning at 11:00 am at the Toyota Center in Kennewick.  The ‘Tips return to Comcast Arena for their final exhibition home game against the Seattle Thunderbirds on Friday, Sep. 12.