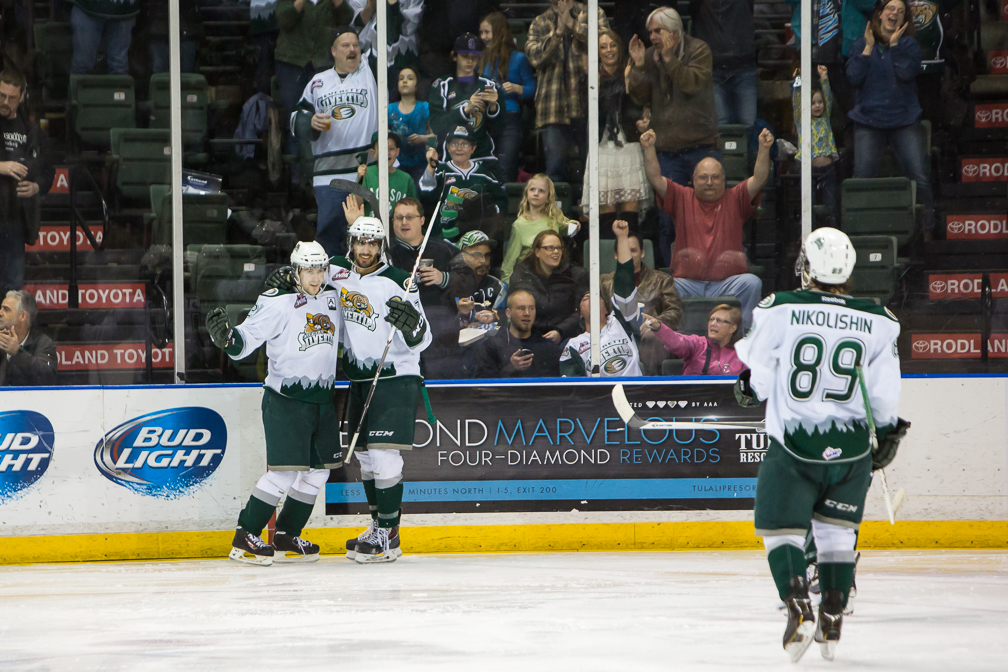 EVERETT – The Everett Silvertips exploded for three goals in the first eight minutes and got a hat trick from Jujhar Khaira in a decisive 6-1 victory over the Seattle Thunderbirds in Game 4 of their first-round playoff series Friday night at Comcast Arena.  After earning their first win of the best-of-seven series, the Silvertips have pulled to within a 3-1 series deficit and successfully forced a Game 5 Saturday night at the ShoWare Center in Kent.

Jujhar Khaira totaled four points on the night, including just the second playoff hat trick in Silvertips history to lead Everett offensively.  Brayden Low and Josh Winquist each tallied a goal and an assist, while Dawson Leedahl and Ivan Nikolishin each picked up a pair of assists.  Carson Stadnyk also scored for the ‘Tips and goaltender Austin Lotz (1-3) stopped 17 shot in net as Everett outshot Seattle 34-18.

Jujhar Khaira got Everett off to a great start in the game after Brayden Low won a puck along the boards, backhanding a shot into the top corner at the 1:27 mark to open the scoring.  The ‘Tips went on the penalty kill soon after, but doubled their lead just 1:05 later when Manraj Hayer started the rush before feeding a breaking Josh Winquist for a shot over Taran Kozun’s glove resulting in a shorthanded goal.  Low then made it 3-0 midway through the period when Brayden Low surprised Kozun from a sharp angle with a quick scoop shot off a feed from Khaira.  Shots were 11-4 in favor of the ‘Tips after 20 minutes of play.

The play evened out in the second period, while Everett killing off two early penalties and Seattle killing off one.  It looked as though the ‘Tips would take a 3-0 lead into the third before Jared Hauf released a wrist shot from the blue line that bounced just inside the post and past a screened Austin Lotz to get Seattle on the board at 18:22.  The Silvertips headed to the dressing room with a 3-1 lead and a 22-14 advantage on the shot clock.

Jujhar Khaira restored the three-goal lead with a powerplay goal early in the third period, picking up a rebound in front and depositing it to the back of the net at 3:30.  Khaira completed his hat trick less than two minutes with later with another powerplay goal when he received a pass from Dawson Leedahl off the rush and scored to make it 5-1 Everett.  The onslaught continued at 6:48 as Carson Stadnyk put the puck between Kozun’s legs to join in the scoring and give the Silvertips a 6-1 lead while chasing Kozun from the game.  Tempers flared at times throughout the remainder of the third, but the score was unchanged in the Everett win.

Taran Kozun (3-1) turned away 23 of 29 shots in 47 minutes in net, while Danny Mumaugh stopped all five shots he faced in the last 13 minutes in the third.  The Silvertips went 2 for 6 on the powerplay and stopped Seattle on all four of their opportunities.

Game 5 of the series is now set for Saturday night at the ShoWare Center in Kent as the Silvertips look to shave their series deficit down to 3-2 and force a sixth game back in Everett on Monday night.  Opening faceoff in Game 5 comes at 7:05 pm Saturday, with pregame broadcast coverage starting at 6:30 on Fox Sports 1380 AM.

If the Silvertips force a Game 6 Monday night at Comcast Arena, single game tickets will go on sale Saturday night following Game 5 online here at everettsilvertips.com and will also be available for purchase by phone at (866) 332-8499 or at the Comcast Arena box office.  Visit our website or call 425-252-5100 for more information.  To keep up with all the latest team news, “like” the Everett Silvertips Hockey Club on Facebook or follow @WHLSilvertips on Twitter.