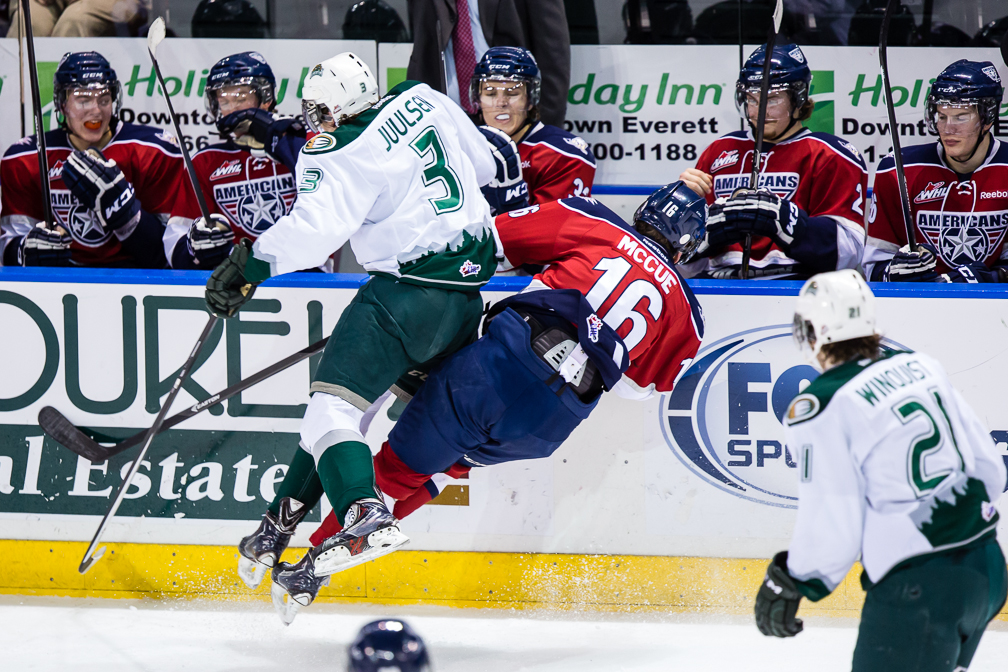 EVERETT – The Everett Silvertips built a 3-0 lead through 50 minutes before hanging on late to earn a 3-2 victory over the Tri-City Americans Friday night at Comcast Arena.  The victory secured Everett’s 11th consecutive WHL playoff berth and moved the ‘Tips two points closer to fifth-place Spokane in the Western Conference standings.

Carson Stadnyk, Jujhar Khaira and Manraj Hayer scored goals for the Silvertips, two of which were assisted by Kohl Bauml as Everett built a 3-0 advantage.  Goaltender Austin Lotz (24-18-3-2) was only nine minutes away from a shutout, but would be tested in the waning minutes and finish with 25 saves to earn the victory in goal.

The ‘Tips got on the board less than two minutes into the first as Carson Stadnyk intercepted an outlet pass at the blueline and wrapped around the net to beat Eric Comrie to the far side with his 18th goal of the year.  Everett doubled the lead on the powerplay when Jujhar Khaira ripped a hard shot just past Comrie’s left pad inside the far post at 8:26.  Tri-City didn’t record its first shot on net until 12 minutes into the frame and was outshot 16-3 by the Silvertips in the first 20 minutes.

The Americans came out strong in the second, registering the first four shots of the period.  Everett settled in and ultimately skated to a narrow 10-9 shot edge as the score remained unchanged through a more evenly played middle stanza.

The Silvertips wasted little time adding to the lead in the third, with Manraj Hayer finishing off a 2-on-1 rush by directing Kohl Bauml’s crisp cross-ice pass into the open half of the net to make it 3-0 at the 1:19 mark.  Tri-City then took three consecutive penalties to put Everett on successive powerplays, but the best scoring change during that period came when Lotz denied Lucas Nickles on a shorthanded breakaway.

Nickles eventually did get the Americans on the board off the rush midway through the third with a backhand shot from the slot.  Tri-City went to the powerplay at the 13:34 mark and left Eric Comrie on the bench for nearly the remainder of the game, getting back within 3-2 when Parker Bowles snapped a shot low into the corner with 2:07 left.  The ‘Tips used blocked shots and Lotz saves to hold off until the buzzer sounded to complete the 3-2 victory.

Following a rare idle Saturday, the Silvertips are back in action Sunday evening with a visit to the ShoWare Center in Kent to take on the rival Seattle Thunderbirds at 5:05. Radio broadcast coverage starts at 4:30 pm on Fox Sports 1380 AM.  The ‘Tips are then back at Comcast Arena for their second-to-last home game of the season Tuesday night at 7:05 pm against the league-leading Kelowna Rockets.

Silvertips flex packs and single game tickets for our remaining 2013-14 home games are available now at the team office. Visit our website or call 425-252-5100 for more information.  To keep up with all the latest team news, “like” the Everett Silvertips Hockey Club on Facebook or follow @WHLSilvertips on Twitter.