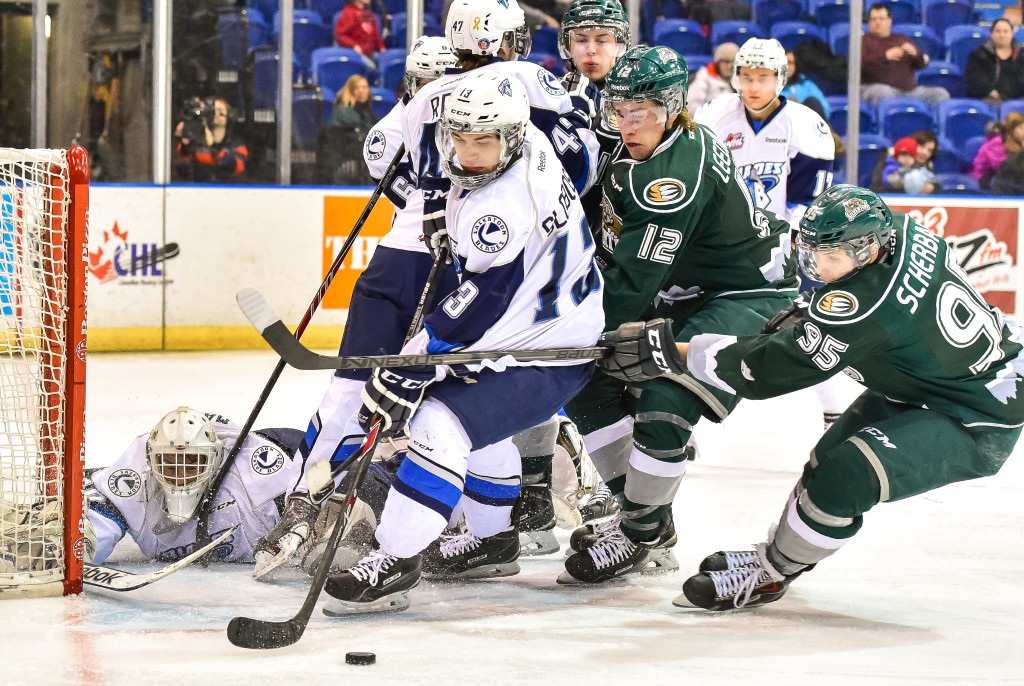 SASKATOON, SK – All three Saskatoon natives and both former Blades on the roster figured in the scoring as the Everett Silvertips used a four-goal second period to roll over the Saskatoon Blades 6-2 Saturday night at the SaskTel Centre.  The ‘Tips are now off to a 2-0 start on their East Division road swing with a stretch of four games in five days starting Tuesday.

The first period was evenly played between the teams, with Saskatoon outshooting Everett 12-10 and taking a 1-0 lead on Sam McKechnie’s powerplay goal.  The ‘Tips evened the score less than 90 seconds later as Carson Stadnyk’s centering pass from the boards caromed off Kohl Bauml and past former Silvertips goaltender Nik Amundrud in the Blades’ net to make it 1-1 after one.

Everett stormed ahead in the second period with four goals in the first ten minutes to take a commanding four-goal lead.  Bauml’s second goal of the night off an assist from Scherbak during a 5-on-3 powerplay gave the ‘Tips the lead just 28 seconds into the second.  Millar knocked in a rebound 50 seconds later during the remaining powerplay time to put the visitors up 3-1.  Dawson Leedahl scored an even-strength goal from the top of the left circle at the 4:39 mark and then Brayden Low poked in Everett’s fifth goal at the side of the net midway through the stanza to make it 5-1 and send Amundrud to the bench in favor of Trevor Martin.  The ‘Tips had a season-high 22 shots in the second period.

The Blades cut into the lead in the third with their second powerplay goal on a point shot from defenseman Jordan Thomson, but the Silvertips answered with a powerplay goal of their own as Ivan Nikolishin set up Patrick Bajkov for a one-timer to complete the 6-2 victory.  The game also featured three fights and a five-minute charging major to Saskatoon’s Garrett Armour.

The ‘Tips have the next two days off as they venture to Brandon, Manitoba to prepare for Tuesday’s game against the Wheat Kings.  The puck drops at 5:00 pm Pacific time, with radio coverage starting at 4:30 on Fox Sports 1380.  Tuesday’s game starts a stretch of four games in five days to complete the road trip next week.