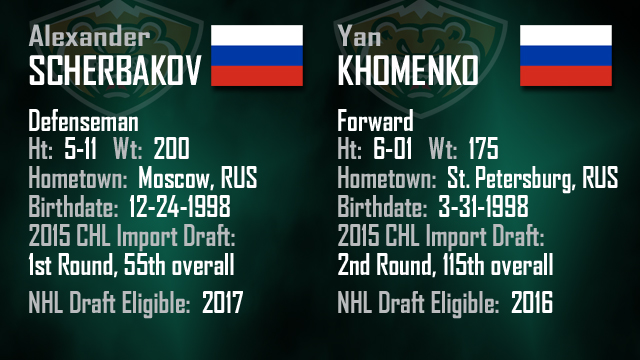 EVERETT – The Everett Silvertips today announced the signing of 2015 CHL Import Draft selections Alexander Scherbakov and Yan Khomenko to standard WHL player agreements.  Both are 1998-born Russian natives who have committed to Everett for the upcoming 2015-16 WHL season.

Scherbakov, a defenseman from Moscow, was the Silvertips’ first-round selection (55th overall) in the June 30 draft involving all 60 CHL clubs.  Khomenko, a forward out of St. Petersburg, was selected in the second round (officially 115th overall, but actually the 75th player chosen).

“Obviously it’s a big positive to have both Alexander and Yan signed and committed to our program less than a month after the Import Draft,” said Silvertips General Manager Garry Davidson.  “I think they are both excited to be Silvertips and we look forward to seeing them out on the ice.  Training camp is coming up shortly and we hope these two promising young players will fit in well with the rest of our team.”

Khomenko, 17, is a left winger measuring in at 6-foot-1 and 175 pounds who played for the Dynamo Moscow Under-17 team last season.  He scored 20 goals in just 33 games with Dynamo, finishing the season with 30 points and 14 penalty minutes.  Khomenko was also selected in the third round (62nd overall) of the 2015 KHL Draft by Ak Bars Kazan and will be eligible for the 2016 NHL Draft.  Originally from Novosibirsk, Russia, his hometown is now listed as St. Petersburg.