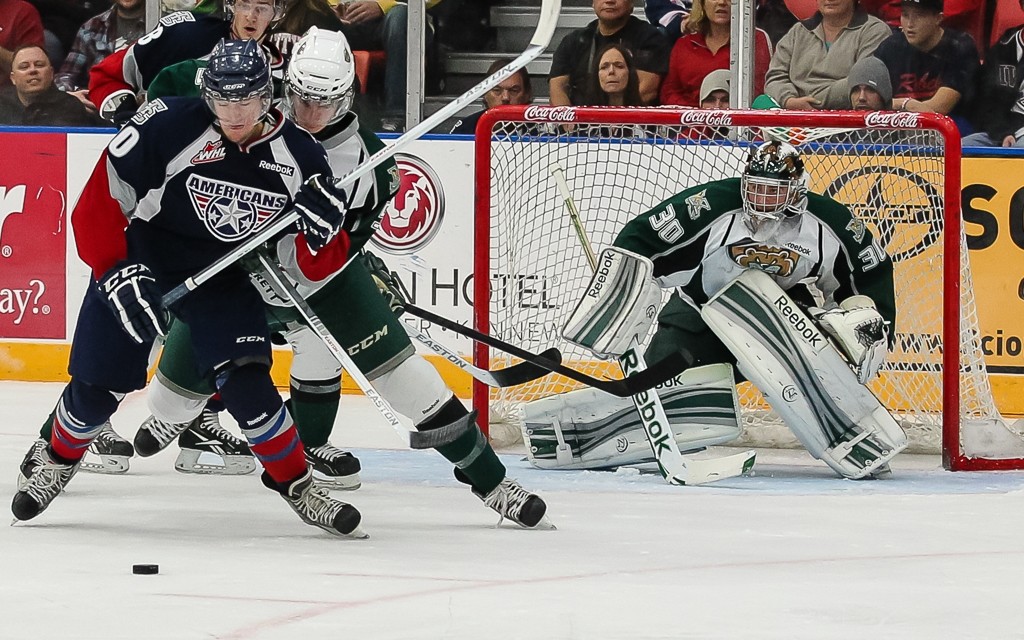 KENNEWICK – The Tri-City Americans outscored the Everett Silvertips 2-1 in the third period to come away with a 3-2 win over the Silvertips Friday night at the Toyota Center.  After their fourth closely-contested loss to Tri-City so far this year, the Silvertips head to Spokane looking for their second win in as many games against the Chiefs on Saturday.

Stathis Soumelidis scored his first career goal in the contest, while Tyler Sandhu notched the other Everett tally.  Both goals were assisted by Ryan Murray, who increased his team-high point total to 17 for the year.  Four of the game’s five goals were scored on the powerplay, with the Silvertips finishing 2 for 3 on the man-advantage and the Americans converting 2 of 7 chances.

Scoring chances were hard to come by in the first period, with Everett skating to a 9-5 shot advantage.  The Silvertips limited Tri-City to just three shots while successfully killing off two Ams’ powerplays before getting two opportunities of their own late in the period.  The ‘Tips took a 1-0 lead on their second powerplay with 38 seconds left in the period as Tri-City goaltender Eric Comrie stopped Landon Oslanski’s blast from the point only to see Stathis Soumelidis backhand the rebound into the net for his first career goal.

The Americans created more pressure in the second period and tied the game at 8:17 as Beau McCue’s centering pass from the corner bounced off a skate in front and into the net.  Both teams had chances to take the lead as the period progressed, but the middle stanza ended with the game even at one.

Tri-City started the third period on the powerplay and took the lead on a Brian Williams goal 23 seconds in.  Everett answered just minutes later however as Tyler Sandhu put in the rebound of a Ryan Murray shot at 3:10 to even the score at two.  After back-to-back penalties put the Silvertips down two men, the Americans re-gained the lead thanks to Malte Stromwall’s rebound tap-in that made it 3-2.  The ‘Tips pushed hard in the final minutes and nearly tied it at the horn when Comrie stopped Murray’s last-chance bid to even the score.

The Silvertips will now make their first visit of the year to Spokane for consecutive games against the Chiefs on Saturday and again on Tuesday.  Saturday’s opening faceoff is set for 7:05 pm, with pregame radio coverage from Spokane Arena starting at 6:30 on Classic Country 1520 AM.  Everett returns to Comcast Arena to face the Red Deer Rebels Wednesday at 7:05 pm.