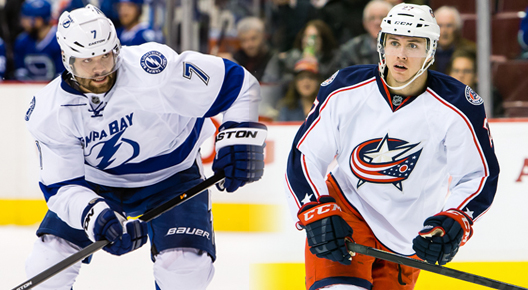 EVERETT – Two of the Everett Silvertips’ most prominent alumni are playing in the 2014 Stanley Cup playoffs, making this the first year two former Silvertips have competed in the same NHL postseason.  Radko Gudas and the Atlantic Division #2 seed Tampa Bay Lightning are facing the Montreal Canadiens in the first round, while Ryan Murray and the Eastern Conference wild card Columbus Blue Jackets are taking on the Pittsburgh Penguins in the Metropolitan Division bracket.

Gudas, 23, is making his first appearance in the NHL playoffs following his first full season with Tampa Bay.  After joining the Lightning from the AHL late last season, he skated in 73 NHL games this year.  In addition to totaling 22 points (3g/19a) and +2 plus/minus rating, Gudas tied for third in the league with 273 hits and sixth with 152 penalty minutes.  A native of Prague, Czech Republic, the bruising defender played one season for Everett in 2009-10 before being selected by Tampa Bay in the third round (66th overall) of the 2010 NHL Entry Draft.

Tampa Bay won its last four games of the regular season to finish 46-27-9 with 101 points, edging Montreal for second place in the Atlantic Division and home ice advantage in their first round series against the Canadiens.  Despite Montreal’s 3-0 series lead however, Gudas ranks second among all players with 16 hits in the playoffs and also has one assist, nine penalty minutes, and four blocked shots.

Murray, 20, enjoyed a very successful rookie campaign with Columbus, compiling four goals, 21 points and a +4 plus/minus rating in 66 games.  He recovered from a month-long injury absence in time to play five games with the Blue Jackets late in the regular season and make his playoff debut Wednesday night.  From White City, Saskatchewan, Murray played 191 games and compiled a franchise-record +51 rating over parts of four seasons with the Silvertips, serving as team captain in three of them.  He became the highest draft pick in franchise history when Columbus selected him second overall in the 2012 NHL Draft.

The Blue Jackets also finished strong with four wins in their last five regular season games, securing a playoff berth for just the second time in franchise history.  With 93 points on a 43-32-7 record, Columbus earned the first Wild Card berth in the Eastern Conference and a first-round matchup with the Pittsburgh Penguins. Murray had an assist in Game 2 and sports a +1 rating with seven shots on goal through two games in the series, which is tied at one game apiece.

Gudas and Murray are two of four former Silvertips to play in the National Hockey League this season, with goaltender Kent Simpson (2008-2012) making one appearance with the Chicago Blackhawks and winger Landon Ferraro (2010-11) playing four games for the Detroit Red Wings.