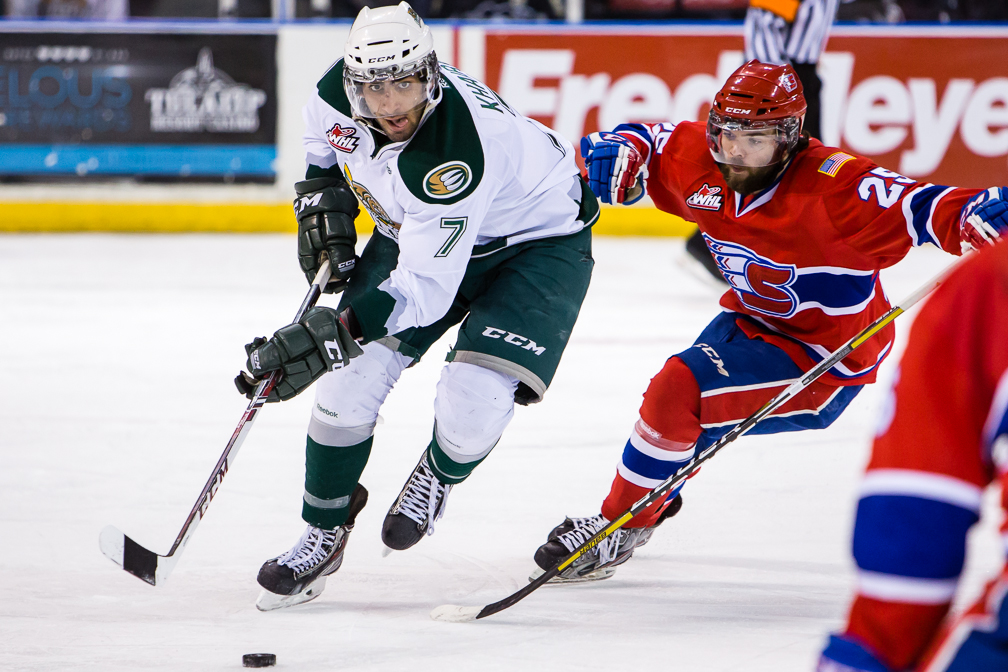 EVERETT – The Everett Silvertips outshot the Spokane Chiefs 37-25 and nearly rallied to tie the game in the third period before suffering a 5-3 defeat Sunday evening at Spokane Veterans Memorial Arena.  The loss capped off a three-in-three weekend for the Silvertips, who now have four days off before hosting Seattle Friday at Comcast Arena.

Josh Winquist scored his 38th goal of the season in the first period and had an assist for Everett.  Cole MacDonald also had a goal and assisted on another by Brayden Low, while Mirco Mueller notched a pair of assists.  Making his WHL debut after signing with the Silvertips last week, 15-year-old goaltender Carter Hart (0-1) stopped 20 Spokane shots while taking the loss in a solid effort.

The action started early in this game as both teams scored on their first shot.  Jujhar Khaira’s faceoff win and Mirco Mueller’s lead pass helped spring Josh Winquist behind the defense to tuck a backhand shot between the pads of Eric Williams only 1:19 into the first period.  It took just 30 seconds for the Chiefs to respond when Dominic Zwerger cut into the slot and ripped a shot into the top corner to tie it at one.  The rest of the period was dead even with both teams missing on one powerplay and the ‘Tips edging Spokane 9-8 in shots.

Everett played well in the second period, outshooting the Chiefs 14-6 and generating a series of scoring chances, but was unable to take the lead.  Spokane then took advantage of its third powerplay opportunity late in the period with precise puck movement leading to Mitch Holmberg’s 50th goal of the season on a one-timer from the slot.  Shots were 23-14 for Everett through two periods, but the home team lead 2-1.

Spokane increased the lead to two at 8:11 of the third period after the Silvertips expected an icing call that never came, leading to a turnover and then Marcus Messier’s goal as Hart was knocked backward during a scramble in front of the Everett net.  The ‘Tips quickly responded when Brayden Low tipped in Cole MacDonald’s point shot to make it 3-2 less than one minute later.  The Chiefs killed off an Everett powerplay and then created a 2-on-1 rush as Adam Helewka exited the penalty box, helping Mike Aviani give Spokane a 4-2 edge.

The Silvertips kept up the pressure however and pulled the goaltender for an extra attacker with nearly three minutes left.  MacDonald snapped a point shot inside the left post shortly afterward to again pull Everett within one.  Pulling the goaltender again with two minutes left, the ‘Tips threatened with multiple chances on goal before Holmberg’s empty-netter sealed it with 38 seconds left.

Eric Williams (29-13-2-1) was named the game’s first star with a 34-save winning effort in the Spokane net.  The Silvertips finished 0 for 4 on the powerplay, while the Chiefs were 1 for 3.

The Silvertips have the next four days off before returning to action with another three-in-three set next weekend.  The ‘Tips host another meeting with the rival Seattle Thunderbirds for our 2014 “Navy Night” Friday at 7:35 pm and are also at home Sunday afternoon for a 4:05 face-off with the Portland Winterhawks, with Saturday night road game against the Tri-City Americans coming in between.

Silvertips flex tickets and “Now & Later” packs for the 2013-14 WHL season are available now at the team office. Visit our website or call 425-252-5100 for more information.  To keep up with all the latest team news, “like” the Everett Silvertips Hockey Club on Facebook or follow @WHLSilvertips on Twitter.