Two monthly league awards go to Silvertips players following a record of 9-3-0-1 in January to reach first place in the U.S. Division. For the week ending on Jan. 21, Fonteyne was named WHL Player of the Week and Hart earned the 14th weekly award in his career. Hart has earned the WHL Goaltender of the Month award for the third straight time this season.

The 5-foot-10, 170-pound forward recorded a career-high five assists in a win against the Tri-City Americans that also tied a Silvertips franchise record, shared with Peter Mueller (2006-07). Fonteyne moved up the WHL scoring race, placing him in a tie for 14th among all WHL players with 67 points (30G-37A) in 52 games, including 14 power play goals and four game-winning goals. 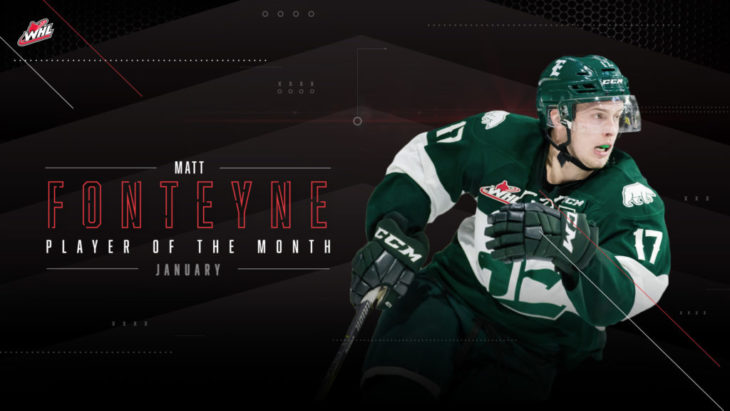 Since being drafted by the Silvertips in the third round, 66th overall, in the 2012 WHL Bantam Draft, Fonteyne has appeared in 320 WHL regular season games with the Silvertips, recording 188 points (77G-111A), including 27 power-play goals, two short-handed goals and 11 game-winning goals.

In 35 career WHL playoff games, Fonteyne has 14 points (6G-8A). He is currently an NHL free agent.

Hart, the first goaltender selected in the 2016 NHL Entry Draft, by the Philadelphia Flyers in the second round (48th overall), posted a 6-1-0-1 record in the month January along with a 1.97 goals-against-average, .934 save percentage and one shutout.

The busy month for the 6-foot-2, 185-pound goaltender from Sherwood Park, Alta. began as he helped lead Canada to a gold medal at the 2018 IIHF World Junior Championship. He returned from Buffalo to the Silvertips’ lineup in the middle of the month and picked up where the 2017-18 campaign left off, extending his personal winning streak to 13 games and allowing just seven goals in his first five games back. 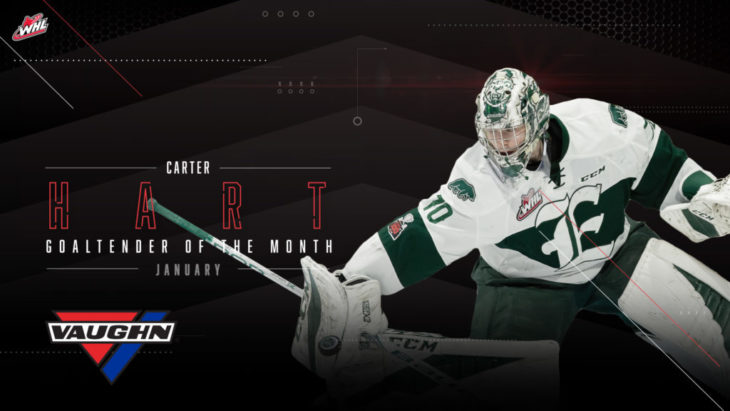 That streak included his 25th career WHL shutout, a 4-0 win over of the Brandon Wheat Kings on Saturday, Jan. 20. The achievement placed him one behind the WHL’s all-time shutout record of 26 shutouts, held by former Vancouver Giants goaltender Tyson Sexsmith.

Hart’s month of January included being named the WHL Goaltender of the Week for the fifth time this season once as well as being recognized as the third star of the game twice. He was also named the WHL’s second star of the night once. This season, Hart continues to lead the league in GAA (1.53), SV% (.953), and shutouts (six). His 19 wins rank him seventh in the league, through just 25 games.

He is the Silvertips franchise leader in shutouts and is currently three wins shy of reaching Leland Irving’s all-time Silvertips wins record (107).

UP NEXT: The Tips open a home-and-home series on Friday with the Kelowna Rockets, 7:05 p.m. (1380 AM / FM 95.3 / Tips App / WHL Live) at Prospera Place and return home Saturday, 7:05 p.m. against the Rockets. Tickets are on sale at www.everettsilvertips.com/ticketcentral and a special Star Wars Night package for Saturday is available at www.everettsilvertips.com/starwars.