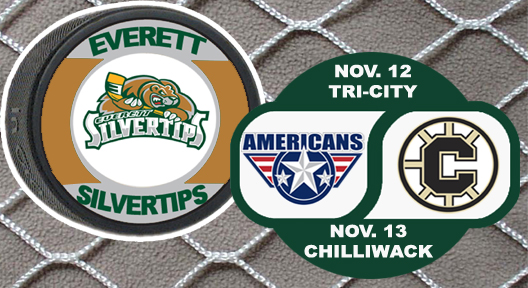 KNOW YOUR FOE
Left wing Adam Hughesman is off to a torrid start this season, leading the team with 22 points (11-11-22) over 18 games.  Hughesman has had success in his 27 career games against Everett, totaling five goals and 18 assists for 23 points.  The ‘Tips will be looking to shut Hughesman down along with linemates Brooks Macek and Patrick Holland, all three of whom are good puck distributors and work well together in the offensive zone.

OWSL CITY
Goaltender Drew Owsley stands much taller in net than his 5’8 frame.  Now a veteran of 81 WHL hockey games, the laterally quick goaltender stood on his head, stopping 38 out of 40 shots in Tri-City’s 3-2 shootout victory over Everett on Pink the Rink Night.  The Silvertips will be looking to rekindle that killer instinct in making life difficult for Owsley in this Friday’s game at Comcast Arena.

THE ROOKIE
16-year old Rookie Connor Rankin has shown a nose for scoring in the first 18 games of his career, posting four goals and six assists for 10 points.  Selected seventh overall in the 2009 WHL Bantam Draft by Tri-City, one selection in front of Silvertips rookie defenseman Nick Walters, the hard-working, competitive Rankin won both the 2009 Mac’s Major Midget Tournament and the 2010 B.C. Major Midget League Championship with the Vancouver Northwest Giants.

KNOW YOUR FOE
Having established themselves as among the hardest working teams in the league last season, the Bruins have added age and experience and some skill in jumping out to a quick start.  Ceske Budejovice, Czech Republic natives Robin Soudek and New York Rangers prospect Roman Horak have teamed with 2009-10 47-goal man and Calgary Flames prospect Ryan Howse to form one of the Western Conference’s more formidable lines.  The defense is sturdy, featuring team captain and the WHL’s leader in points amongst defensemen in Brandon Manning.

POWER SURGE
The biggest improvement from last year’s Bruins team is the emergence of the WHL’s #1 power play unit.  Adept at movement without the puck while also making sure the puck changes hands quickly, the Bruins power play entered the middle of the week operating at 29.3%.  Ryan Howse ranks second in the league with eight power play goals, while Jesse Pauls and Brandon Manning have combined for 21 power play assists.

STAHL-IDAY
Defenseman Tyler Stahl, a Carolina Hurricanes draft pick, is one of the biggest hitters in the Western Conference and the anchor to the Bruins’ defensive systems.  Built like a traditional Western Hockey League defenseman at 6’2, 201, Stahl is excellent behind his own net and will log heavy minutes while displaying his rugged style of play.  In 72 career WHL games, he has totaled 192 penalty minutes.