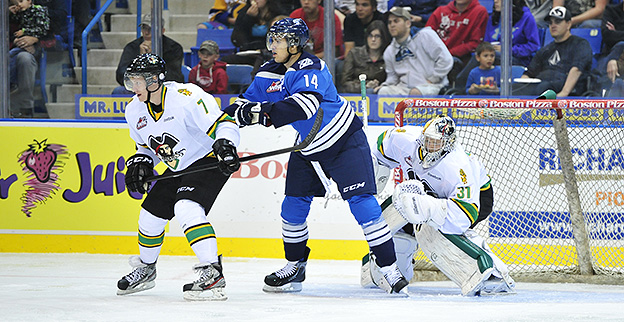 Calgary, AB – The 2012-13 WHL regular season enters its first weekend of play in 2013 with 22 games on the schedule for Friday, Saturday and Sunday.

AROUND THE RINKS THIS WEEKEND…

In Brandon, MB, Saturday night is Family Skate Night when the Wheat Kings take on the Medicine Hat Tigers.  Fans can join the team for a skate following the game.

In Cranbrook, B.C., the Kootenay Ice  will enjoy some Tobogganing Fun with members of the Kids Club on Saturday afternoon.

In Saskatoon, SK, Friday night is Ukrainian Night when the Blades host the Prince Albert Raiders.  Fans can enjoy Ukrainian goodies like perogies and sausage, and will be treated to Ukrainian dancing and a Ukrainian band.

The Western Hockey League is proud to announce that WHL Member Clubs have collected over 94,000 teddy bears and winter wear items leading up to the WHL’s Christmas break this year.

The plush toys and winter wear are then donated by the WHL Club to several charitable organizations that reach out to thousands of families and children in need, not just in WHL markets, but to other communities well beyond.

The Canadian Hockey League is proud to announce that a total of 72 current CHL players are listed on official International Ice Hockey Federation rosters and are competing in the 2013 IIHF World Junior Hockey Championship underway in Ufa, Russia.

Included on the list are 19 players from the Western Hockey League.

The 72 players includes a representative from all 10 participating countries including Canada who leads the way with 22 CHL players followed by the Czech Republic with 12 players, the United States with nine players, Germany and Switzerland with six players each, Russia with five players, Latvia and Sweden with four players each, followed by Finland and Slovakia with two players each.

The WHL’s trade deadline is on Thursday, January 10th, at 3:00pm MST as WHL Clubs look to add or subtract from their rosters ahead of the 2013 WHL Playoffs.

A couple of key transactions have already taken place as the trade deadline approaches with the Prince Albert Raiders, Kamloops Blazers and Victoria Royals adding to their rosters.

Josh Nicholls and the Saskatoon Blades take on Josh Morrissey and the Prince Albert Raiders in a battle between East Division rivals on Friday night at Credit Union Centre in Saskatoon, SK.

The Raiders suffered a 5-2 loss to the visiting Medicine Hat Tigers on Wednesday night in Prince Albert, snapping a three-game winning streak, and currently hold a comfortable 10-point lead over Saskatoon for first place in the East Division.  The Raiders have won 12 of 18 road games this season after having won just seven times away from home all of last season.  Morrissey, a defenceman, ranks sixth among WHL skaters in NHL Central Scouting’s fall rankings for the 2013 NHL Draft.

The Blades downed the visiting Tigers 7-2 on Tuesday night in Saskatoon to put an end to a four-game losing skid, and currently sit in sixth place in the Eastern Conference standings.  The Blades had allowed 18 goals over their four-game losing skid before Tuesday’s win over Medicine Hat.  Nicholls, who plays his 300th career game on Friday night, shares the WHL lead with 27 goals this season.

Friday’s clash marks the fifth meeting of the season between the Blades and Raiders.  Prince Albert won three of the first four meetings, including both games in a home-and-home series between the teams last weekend.

Brandon Magee and the Victoria Royals take on Justin Feser and the Tri-City Americans for a pair of meetings this weekend between two clubs looking to move up the Western Conference ladder.

The Royals dropped a 4-2 decision to the Rockets in Kelowna on Wednesday night, halting a two-game win streak, and currently sit five points back of the Ams for fifth place in the conference.  The Royals hold two games in hand on the Americans.  The Royals are 6-3-0-1 over their last 10 games on home ice.

The Americans skated to a 6-3 win over the visiting Spokane Chiefs on New Year’s Eve for their third victory over their last five games, and currently trail the Chiefs by four points for fourth place in the Western Conference.  The Ams’ penalty killing unit is operating at 88.6% efficiency on the road.  Feser needs nine more points to hit the 300-point plateau for his WHL career.

This weekend’s meetings mark the second and third clashes of the season between the Royals and Ams.  The Royals claimed a 4-3 win in a shootout in Kennewick, WA, in the first meeting on October 6th.