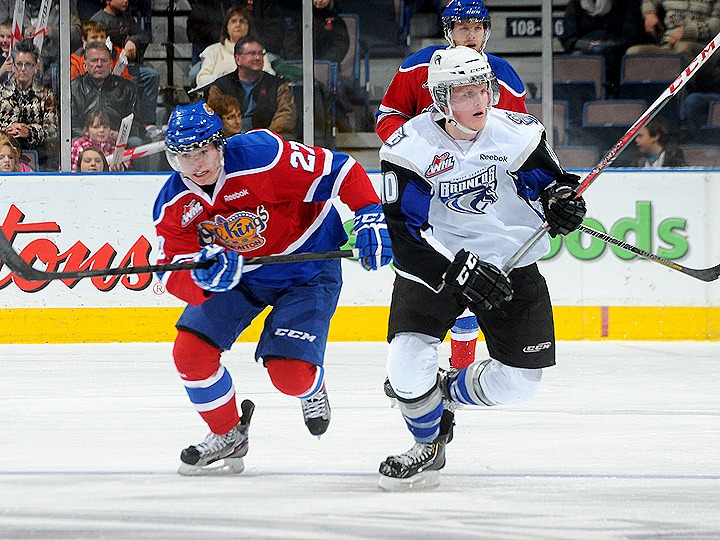 Calgary, AB – The 2012-13 WHL regular season enters its first weekend of play in February with 20 games on the schedule for Friday and Saturday.  No WHL games are scheduled for Super Bowl Sunday.

AROUND THE RINKS THIS WEEKEND…

In Edmonton, AB, Friday night is Pink the Rink night when the Oil Kings host the Swift Current Broncos.  The team will be sporting special pink jerseys and a few players will even be using limited edition pink sticks.  The jerseys and sticks will be auctioned off with proceeds going to a variety of organizations involved with the fight against cancer.

In Everett, WA, Friday night is the third and final Ryan Murray Bobblehead night when the Silvertips host the Tri-City Americans.

In Medicine Hat, AB, the Tigers will be looking to impress fans with their skills at their second annual Skills Competition next Tuesday.  Proceeds from ticket sales for the even go to the Multiple Sclerosis Society of Canada.

In Vancouver, B.C., the Giants will salute one of the greatest to ever lace up the skates on Friday with Joe Sakic Hall of Fame Night on Friday when the Kelowna Rockets come to town.  A select number of lucky fans will get a meet and greet with ‘Burnaby’ Joe.

Niedermayer spent three seasons with the Blazers, winning a Memorial Cup in 1992, before going on to an outstanding NHL and international career.

The WHL Alumni Achievement Award annually recognizes WHL graduates who pursued professional hockey and achieved a distinguished career in the NHL as well as an alumnus who has obtained a post-secondary education through the WHL Scholarship Program and has moved on to a highly successful business career.  The recipients are selected annually by the WHL Alumni Association Executive Committee, which is headed by former WHL and NHL graduate Kelly Hrudey.

Skilliter made his NHL debut on Monday in Edmonton for the Oilers/Colorado Avalanche match-up, while Murchison made his first NHL appearance in Vancouver for the game between the Canucks and the Avalanche.

They may be Central Division rivals on the ice, but the Red Deer Rebels and the Lethbridge Hurricanes have partnered to help the Canadian Blood Services with their ‘Hockey…It’s In Our Blood’ campaign which kicks off February 1st and runs throughout the month of February.

The teams will compete to see who can solicit the most blood donations.  Both the Rebels and Hurricanes are encouraging fans to donate blood to this worthy cause

Colin Smith and the Kamloops Blazers welcome Mitch Holmberg and the Spokane Chiefs for a match-up between two strong Western Conference combatants on Friday night in Kamloops, B.C.

Friday’s match-up between the Blazers and Chiefs can be seen live throughout western Canada on SHAW and SHAW Direct channel 299 (7:00pm PST).  The match-up can also be seen on ROOT SPORTS in the Pacific Northwest region (7:00pm PST).

The Blazers are coming off a 5-2 loss to the Winterhawks in Portland to the Winterhawks on Wednesday night, stopping a three-game win streak, and currently sit in second place in the B.C. Division and third spot in the Western Conference.  The Blazers are 19-4-1-1 on home ice this season.  Smith scored his 34th goal and 80th point of the season on Wednesday in Portland.

The Chiefs have been idle since dropping a 4-3 decision to the visiting Medicine Hat Tigers last Saturday for their second straight setback, and currently sit in fourth place in the Western Conference.  The Chiefs’ penalty killing unit is operating at 85.3% efficiency on the road this season.  Holmberg has 27 goals and 54 points this season.

It’s the third meeting of the season between the Chiefs and Blazers.  The teams split the first two meetings, with the home team winning on each occasion.

For the complete WHL on SHAW and ROOT SPORTS broadcast schedules, CLICK HERE

Michael St. Croix and the Edmonton Oil Kings welcome Adam Lowry and the Swift Current Broncos for a battle between two of the hottest Clubs in the WHL’s Eastern Conference on Friday night.

The Oil Kings are coming off a 4-2 win over the visiting Kootenay Ice on Wednesday in a rare mid-week matinee, and have won six straight games to put them seven points clear for first place in the conference.  The Oil Kings boast a 22-5-1-2 record on home ice this season.  The Oil Kings have outscored their opponents 33-8 over their last six games.

The Broncos edged the visiting Calgary Hitmen 5-4 on Wednesday night to post their eighth victory over their last nine games, and currently sit in fifth place in the Eastern Conference.  Swift Current has won its last three road games.  Lowry ranks fourth in the WHL scoring race with 70 points this season.

Friday’s clash marks the third meeting of the season between the Broncos and Oil Kings.  The Oil Kings won both previous meetings, with both games being decided by a 2-1 score line.