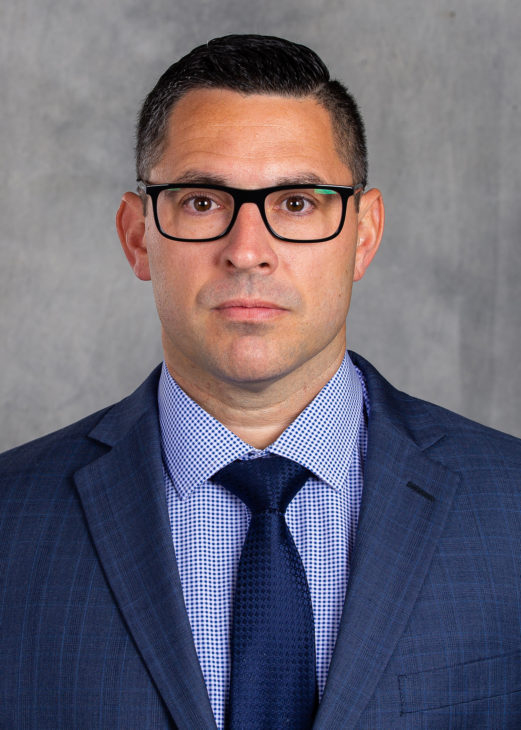 Dennis Williams, 42 (8/14/79), enters his sixth season behind the bench as Silvertips head coach and the engineer of success for the program with four U.S. Division titles, a Western Conference championship, success in the classroom and several Silvertips earning looks for international play and selections in the NHL Entry Draft. As a two-time recipient of the WHL Western Conference Coach of the Year award and the 2022 U.S. Division Coach of the Year, Williams has a record of 195-62-11-11 (.738 percentage) behind the bench in his WHL career. He was promoted to the dual position of general manager and head coach on Jul. 12, 2021.

Named the fifth head coach in franchise history on May 15, 2017, Williams promptly embarked on a year-long journey which broke the Silvertips record for wins by a first year head coach (47), earned their third most points (99) in franchise history, set a new single season franchise record for goals (246), were second in the league for goal differential (+80), and earned eight goals or more in a game on five separate occasions. They broke single game franchise records for most goals in a game (11) and largest margin of victory (11) on Dec. 27 in an 11-0 victory at Vancouver, while goaltender Carter Hart earned his second CHL Goaltender of the Year award, and six different Silvertips were drafted by NHL clubs or signed to NHL or AHL contracts. Williams followed with another 47-win and 99-point season, the Silvertips’ fourth U.S. Division title in five seasons. Goaltender Dustin Wolf was named WHL Western Conference Goaltender of the Year and CHL Scholastic Player of the Year, while two more Tips players were selected in the NHL Entry Draft: defenseman Gianni Fairbrother (Montreal) and Wolf (Calgary).

The 2019-20 season was cut short by the COVID-19 pandemic, though Williams and the Silvertips secured another remarkable campaign, winning 46 games with 96 standings points for a second-place finish in the division. Three Silvertips were drafted to the NHL following the season: Gage Goncalves (Tampa Bay, 2nd-round), Kasper Puutio (Florida, 5th-round) and Ronan Seeley (Carolina, 7th-round). He then guided the Silvertips to their eighth U.S. Division title in the shortened 2021 season, posting a 19-4 (38 points) record and the second-highest points percentage (.826) in the league. Defenseman Olen Zellweger was selected in the NHL Entry Draft 34th overall by the Anaheim Ducks.

During the shortened 2021 WHL season, the Silvertips had players earn the following league awards and achievements:

With a full slate of games and fans returning back to the arena for the 2021-22 season, Williams and the Silvertips assembled one of the greatest seasons in franchise history. Everett clinched their ninth U.S. Division title with a 45-13-5-5 record, clinched the top seed in the Western Conference for just the fifth time in franchise history, eclipsed the 100-point mark for just the third time and scored the most goals as a team in franchise history (280). The team also strung together the longest win streak to start a season (six games) and the longest point streak (18 games) in the team’s 19-year history. Everett netted 79 powerplay goals in 2021-22, the most of any WHL team and most in team history since 2006-07.

The Silvertips had players earn the following league awards and achievements during the 2021-22 season, helmed by Williams:

The native of Stratford, Ontario has also served as a coach for Hockey Canada, including as an assistant coach for the 2022 World Junior Championship, an assistant at the 2019 Hlinka Gretzky Cup, and as head coach for Team Canada Black at the 2018 U17 World Hockey Challenge.

Williams carries 16 years of head coaching experience across junior and college levels with the Silvertips, Bloomington of the United States Hockey League, and Amarillo of the North American Hockey League. After guiding Bloomington to a 29-24-7 record and fifth place in the Eastern Conference in their expansion season of 2014-15, he led the Thunder in 2015-16 to a 36-18-6 record, an appearance in the Eastern Conference Final, and a victory shy of reaching the league’s Clark Cup Finals. He led Amarillo to three consecutive 40-win seasons from 2011-14, amassing a career record of 168-44-2-24 and a points percentage of .756 across four years in the NAHL. He delivered three straight South Division titles, back-to-back and league leading 46-win campaigns, and a Robertson Cup title to Amarillo in 2012-13.

Under Williams, the Bulls shattered a 35-year old record with 99 points in back to back seasons (2011-13) and he was named NAHL Coach of the Year after the Bulls’ league championship. Williams’ teams in Amarillo led the league in goals from 2011-13, and finished second in the NAHL with 207 goals with a +87 goal differential in 2013-14.

During his time in Amarillo and Bloomington, he helped 74 players advance to play in the NCAA Division-I ranks, and with the Bulls coached seven division All-Conference selections, two All-NAHL First Team members, one defenseman of the year, and one division All-Rookie honoree. With the Thunder, a total of 12 selections were either chosen for the NHL Entry Draft, and for rosters at the U17 Ivan Hlinka Memorial Tournament, U18 World Championships, and the Junior A World Challenge. He assisted with community outreach efforts with every one of his Bulls squads containing a community service award recipient, and his team in Bloomington was selected as recipient of the 2016-17 Curt Hammer Community Service Award.

The native of Stratford, Ontario has served Utica College and University of Alabama-Huntsville as assistant coach and started his head coaching career at the NCAA level with four seasons serving Neumann College and Bowling Green State University. both in head coach and assistant coach positions. The former right winger received his bachelors and masters degrees from Bowling Green, finishing with 117 career games, 20 points (12 goals, 8 assists), and 198 penalty minutes for the Falcons.

Dennis and his wife, Hollie, live in Lake Stevens and have two daughters, Emerson and Elyse.