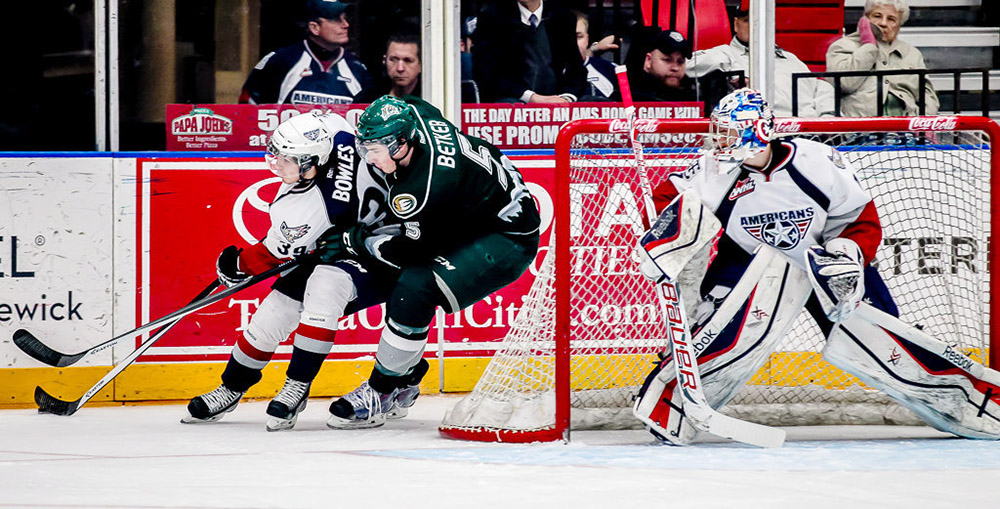 KENNEWICK – The Everett Silvertips earned their sixth win over the Tri-City Americans in eight tries Friday night, finishing the season series with a 4-2 victory at the Toyota Center.  With five straight victories overall, the Silvertips have matched their longest win streak of the season heading into another important game Saturday against the Seattle Thunderbirds.

Matt Fonteyne, Ivan Nikolishin, Logan Aasman and Brayden Low scored goals for the Silvertips, who held a one-goal lead for most of the night.  Matt Pufahl also drew a pair of assists to establish a new career high with 45 points this season, while Zane Jones recorded his first point as a Silvertip and Austin Lotz (27-18-3-2) turned in another strong effort with 32 saves in goal.

Everett started quickly in this one, scoring first just over one minute in as Matt Fonteyne sped down the right boards and cut to the net before tucking a backhand shot past Eric Comrie.  The Silvertips established a good tempo for the remainder of the period, building an 18-11 shot lead and nearly adding to the lead if not for big saves by Comrie on Ivan Nikolishin and Zane Jones.  Tri-City tied the game in the final minute of the first however when Justin Gutierrez spun off a check in the corner and toward the front before putting a shot inside the far post to make it 1-1.

The ‘Tips re-gained the lead midway through the second stanza on a powerplay goal, with Josh Winquist selling a shot from the left circle before sliding a pass across the slot to Ivan Nikolishin for an open-net tap-in at the 8:30 mark.  Logan Aasman made it 3-1 off the rush late in the period, receiving a pass from Zane Jones off the right boards and sending a deflected shot in over Comrie’s right arm.  Tri-City responded with 16 seconds left in the period, cutting the lead back to one after Lucas Nickles was hit by a point shot and quickly swept the loose puck under Lotz to conclude the period.

The score remained unchanged through most of the third period, with the Americans sending a game-high 15 shots on goal and building momentum as the clock continued to run down.  Everett held the one-goal lead into the final moments however and then cemented the win with Brayden Low’s empty-net goal from the red line.

The Silvertips held a 29-19 shot lead through two periods before finishing the game with a 38-34 edge.  Eric Comrie (25-25-3-5) stopped 34 shots while taking the loss in goal for Tri-City.  The ‘Tips scored on one of four powerplay opportunities while holding the Americans scoreless on two chances.

The Silvertips are right back in action Saturday night with a visit to the ShoWare Center in Kent for their last game of the season against the rival Seattle Thunderbirds at 7:05 pm.  Pregame broadcast coverage gets underway at 6:30 on Fox Sports 1380 AM.  Then after two more road games next week, the Silvertips’ last home game of the regular season comes up on Saturday, March 15 against the Victoria Royals.

Single game tickets for our last regular season home game are available now at the team office, with playoff packages going on sale soon.  Visit our website or call 425-252-5100 for more information.  To keep up with all the latest team news, “like” the Everett Silvertips Hockey Club on Facebook or follow @WHLSilvertips on Twitter.