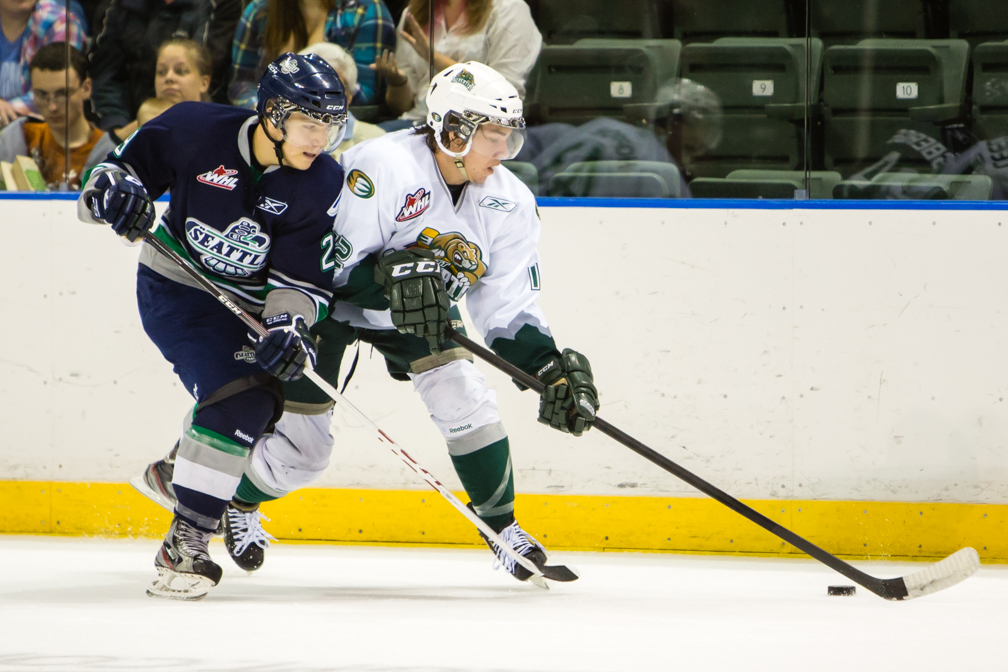 KENT – The Everett Silvertips scored three goals in less than 90 seconds late in the first period to pave the way for a 5-3 victory over the Seattle Thunderbirds Saturday night at the ShoWare Center. The ‘Tips have now completed preseason play with a perfect 7-0 record as they prepare to host the visiting Prince George Cougars in their regular season opener next Saturday night at Comcast Arena.

Rookie defenseman Kevin Davis led the way for Everett Saturday, scoring a goal and adding two assists for a three-point night.  Kohl Bauml contributed a pair of assists and the ‘Tips also got goals from Carson Stadnyk, Linden Penner, Matt Pufahl and Dawson Leedahl.  Goaltender Daniel Cotton (3-0-0-0) turned away 25 of 28 shot in net to get the win against his former team.

The game was tied at one in the first before the ‘Tips scored three times in the last three minutes to take a 4-1 lead.  Kevin Davis opened the scoring with a 4-on-3 powerplay goal, creeping into the slot and beating Justin Myles with a low shot at 10:11.  Seattle tied the game with a shorthanded score when Alexander Delnov created a partial breakaway and tucked the puck between Cotton’s pads.  Carson Stadnyk and Linden Penner then notched matching deflection goals just 21 seconds apart, with both re-directing point shots from Davis as the ‘Tips suddenly found themselves with a 3-1 lead.  Everett was back on the powerplay less than a minute later when Matt Pufahl extended the lead, finding the top corner with a long wrist shot to make it 4-1 through 20 minutes.  Shots were 20-8 in favor of the Silvertips.

The teams exchanged goals in the middle frame as Everett maintained a three-goal edge heading into the final period of play. The T-Birds closed the gap early in the second when Connor Honey found Branden Troock in front, where he slid the puck under Cotton to make it 4-2.  Dawson Leedahl got one back for the ‘Tips as he picked up his own rebound and slipped it past Myles for Everett’s third powerplay goal of the night at 7:26.

The game turned physical in the third period as the two rivals found themselves at odds in a number of scrums after the whistle.  Seattle scored a late goal with the extra attacker on during a scramble in front as Roberts Lipsbergs banged in a loose puck to bring his team within two.  The Thunderbirds kept goaltender Justin Myles on the bench in the final minute of play, but the Silvertips held on for the 5-3 victory.

Final shots were 37-28 in favor of the Silvertips, with Everett scoring three powerplay goals on ten opportunities and Seattle finishing 0 for 3.  Myles (2-1-0-0) ended with 32 saves for the T-Birds in defeat.

After four straight weekends of preparation through training camp and preseason games, the Silvertips will now open the 2013-14 WHL regular season Saturday night when the Prince George Cougars visit Comcast Arena at 7:05 pm.  As we celebrate the start of the 11th season of Silvertips hockey in Everett, we ask that you help us “Fill the House” for the opener to raise money for Housing Hope.

Season tickets, mini-game packages and six-game packs for the 2013-14 WHL season are available now at the team office.  If you have already purchased a package, tickets are available for pick-up at the team office during regular office hours (8:30a-5p, Monday-Friday).  Visit our website or call 425-252-5100 for more information.  To keep up with all the latest team news, “like” the Everett Silvertips Hockey Club on Facebook or follow @WHLSilvertips on Twitter.