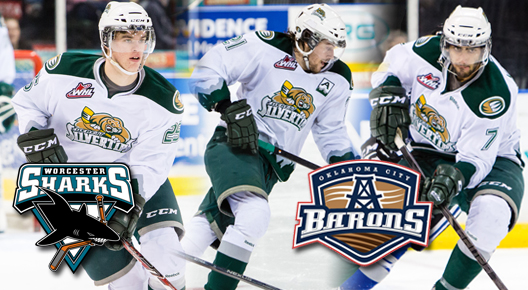 EVERETT – Three members of the Everett Silvertips are off to join professional teams in the American Hockey League, as signed NHL prospects Mirco Mueller and Jujhar Khaira have both been recalled by their respective parent clubs and free-agent Josh Winquist has earned an Amateur Tryout (ATO) contract.  The San Jose Sharks assigned Mueller to their top AHL affiliate in Worchester, Massachusetts on Sunday.  The Edmonton Oilers have sent Khaira to the AHL’s Oklahoma City Barons, where Winquist has also signed his tryout.

Winquist, 20, played his entire five-year WHL career with the Silvertips, skating in over 300 career games with the club from 2009-2014.  The St. Albert, Alberta native enjoyed one of the most productive seasons in Silvertips history in 67 games this year, setting a franchise record with 47 goals and adding 46 assists to tie Zach Hamill’s team mark of 93 points.  He finished his junior career ranking second in franchise history in goals (101), assists (115) and points (216) and third all-time in games played (301).  As an undrafted free agent, Winquist will hope to parlay his AHL tryout into a professional contract.

Mueller, 19, just completed his second WHL season with the Silvertips.  San Jose’s first-round pick (18th overall) in the 2013 NHL Draft, he totaled 27 points (5g/22a) and a +1 rating while typically matching up against opponents’ top lines in his 60 appearances for Everett this year.  During his 18-year-old season, Mueller also participated in his second consecutive IIHF World Junior Championship with Team Switzerland.

Khaira, 19, was assigned to Everett after leaving Michigan Tech University to sign with the Oilers in August.  In 59 games with the Silvertips, he ranked fourth on the team and 11th among all WHL rookies with 43 points on 16 goals and 27 assists. The Surrey, British Columbia product skated in the 2013 Subway Super Series, notching two assists in Game 6 to help Team WHL clinch the series win over Team Russia.