Winterhawks pull away from Tips 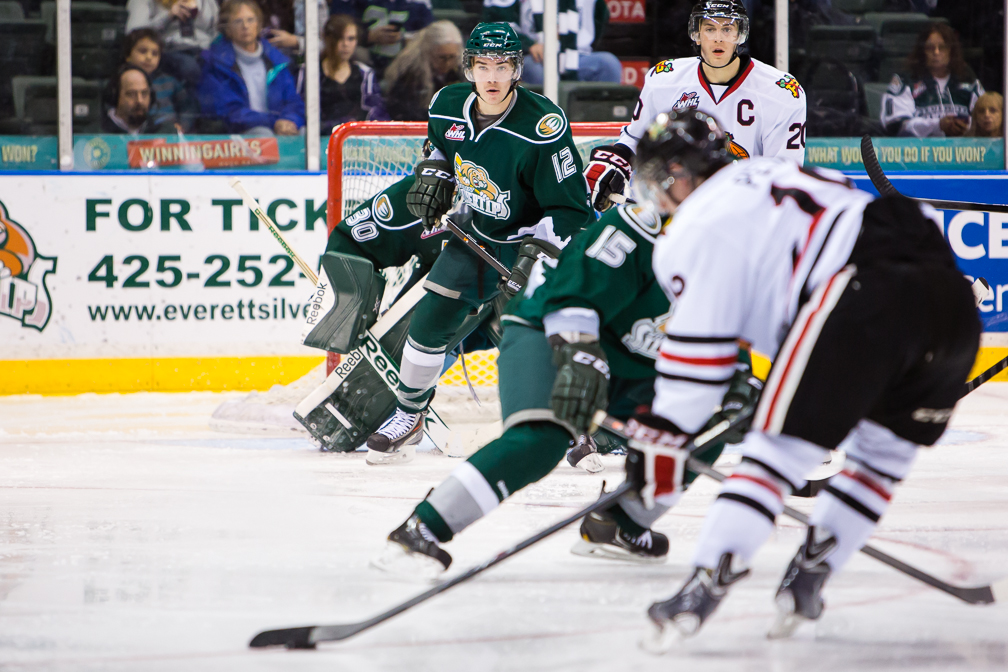 PORTLAND, OR – The Portland Winterhawks scored the game’s last four goals to hand the Everett Silvertips a 5-1 defeat Friday night at the Moda Center (formerly the Rose Garden).  The loss put the Silvertips’ record at 2-3 against the Winterhawks this season with the teams set to face-off two more times in the next five days.

Jujhar Khaira scored Everett’s lone goal on the powerplay, tipping in a shot from Ivan Nikolishin to tie the game at one early in the second period.  The ‘Tips were not able to beat goaltender Brendan Burke again however as the Winterhawks re-took the lead late in the period and then tacked on three more goals in the third.

The Silvertips had two powerplays and a few close calls in the first period, but Brendan Burke kept them at bay as Portland went up 1-0.  The Winterhawks’ goal came in transition just after an Everett flurry in the offensive zone, with Nic Petan drawing the defense toward him before feeding a pass to Brendan Leipsic for the backhand finish in front.  The ‘Tips held a 10-8 shot edge but trailed by a goal through 20 minutes.

Everett started the second period on another powerplay and quickly evened the score when Jujhar Khaira re-directed an Ivan Nikolishin shot into the net for his 13th goal of the season.  It remained 1-1 through most of the second period, with the ‘Tips killing off one powerplay opportunity for the Winterhawks.  Portland regained the lead at 16:52 however, with Nic Petan picking up a loose puck below the goal line and pushing it under Austin Lotz, where it caromed off Ben Betker’s skate in the crease and just over the goal line to make it 2-1 ‘Hawks after two.

Portland extended the lead only 42 seconds into the third period when Derrick Pouliot scored on a shot from the left boards.  The ‘Tips were unable to mount a comeback before Petan added his second of the night off the rush seven minutes later, making it 3-1 and sending Daniel Cotton into the game in relief of Lotz.  The Winterhawks capped off the scoring with a 5-on-3 powerplay goal from Matt Dumba in the final minute.

The Silvertips continue a three-in-three weekend of U.S. Division games on Saturday when they visit the ShoWare Center in Kent for their fourth matchup of the season with the rival Seattle Thunderbirds at 7:05 pm.  Broadcast coverage on Fox Sports 1380 AM gets underway at 6:30 pm.  The Silvertips then finish the weekend on home ice with another game against the Winterhawks at 4:05 Sunday afternoon at Comcast Arena.